The Negro Grandsons of Vercingetorix by Alain Mabanckou 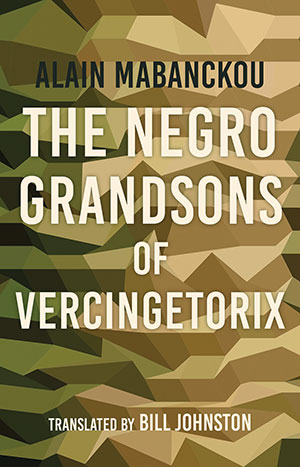 In the Republic of Vietongo, life is a perpetual schism. The setting of Alain Mabanckou’s most recently translated novel, The Negro Grandsons of Vercingetorix, is a dance that cascades into a knife fight and back again at the whim of its politicians and generals. Only the majority, deprived of agency, emerge worse for wear between peace and unrest, scarcity and prosperity, and jubilation and genocide. Nearly twenty years removed from its French publication, Mabanckou’s aptitude for characterization and his unflinching glimpse of plight echo within every movement of Vercingetorix.

Derived from the recovered journal of a woman, Hortense, fleeing southern Vietongo, Vercingetorix focuses less on the ideological conflict between the north and south. Instead, and in a more powerful motion, Mabanckou places a microscopic lens on the most frequently disenfranchised: women. From Chistiane, a longtime friend of Hortense who endures ineffable abuse and cruelty from the titular militants, to Mam’Soko, a village elder undisturbed by the war pressing against the edge of her property, the tales of these characters are concise and clear. Some passages, such as Christiane’s recollection of her life in Pointe-Rouge, feel a bit too comprehensive and, as a result, verge on damaging the realism of the narrative device, Hortense’s journal. Though it is challenging to weave the context of a fictional nation into the novel without hindering its momentum, Mabanckou’s ability to do so is evident in his later work, such as Black Moses.

Beyond Vercingetorix’s figures, Mabanckou crafts a setting as timeless as it is prophetic. Presumably an amalgam of Vietnam and the Republic of the Congo, Vietongo is described in the novel’s preface as a “mosaic of ethnicities” and, by extension, cultures. The novel’s parallels to reality are rampant, notably Pointe-Rouge’s reflection of Mabanckou’s home city, Pointe-Noire. Despite the homogenization of ideas and lifestyles, regionalism leads to the authoritative rule of the north and, in contrast, the violent radicalization of the south. The tug-of-war Mabanckou conjures is not only telling of Africa but the world at large—Hortense inquires whether, to some extent, we are not all Vietongolese.

How quickly life’s joy can devolve into tragedy lingers in the shadow of every paragraph. Like Atwood’s The Handmaid’s Tale, one is left only to presume the worst for the narrator. Yet, amid the rising volume of this dirge is an unshakable sense that humanity will weather the violence, a sentiment echoed in Hortense’s resolve. With The Negro Grandsons of Vercingetorix, Mabanckou stresses that even as violence is an accomplice to life, perseverance is synonymous.