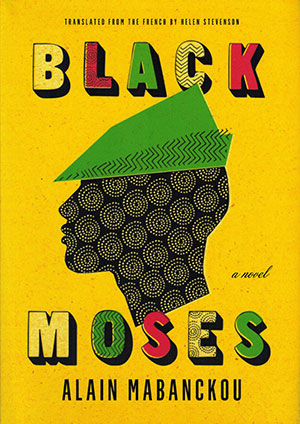 A beautiful amalgam of childlike optimism and the harshness of reality, Alain Mabanckou’s Black Moses solidifies the author’s status as a modern master of prose (see WLT, Sept. 2016). Possessing an overt tether to Mabanckou’s previous work, The Lights of Pointe-Noire, the text overflows with the rich and illustrious local color the author has made his hallmark. Unlike Pointe-Noire, however, Black Moses adopts a mode of fiction emphasizing the real plight of youth in twentieth-century Africa while simultaneously fostering magical realism reminiscent of the late Gabriel García Márquez.

Tracing the adolescence and early adulthood of Moses, an orphan with a full name nearly as long as his tale, the text details personal insignificance to self-actualization and back again. Though the novel’s initial movement explores the protagonist’s oppression at the hands of a corrupt director, the latter portion of the text examines Moses’s desperate attempt to secure meaning as his sense of wonder evaporates.

From the briefest encounter with a mortician who openly speaks with cadavers to a brothel owner named after a Fiat 500, Mabanckou’s characters pulsate with life. Each page unveils a new face, an additional quirk, or the unfortunate and abrupt end to an established figure. This frequent strategy is rarely overbearing; the impact of each personality is carefully woven into the greater whole of Moses. Despite a momentary, physical presence, no one face is ever glossed over superficially.

Black Moses travels in close tandem with its historical context, drawing particular attention to a scientific revolution in its early stages before transitioning into a harsh, ethnic cleansing in the latter. Mabanckou takes care in crafting the extermination of the marginalized while criticizing the hypocrisy of the oppressing class, most notably the mayor of Pointe-Noire. Moses’s own fluctuation echoes what the novel describes on a national stage as he attempts to harbor hope while doused with depravity and violence.

Mabanckou’s recognition of life’s harshness, especially in how it relates to an orphan struck by fantasy, fortunately does not compromise the persistence of optimism. Rather, it fuels his narrative and memorializes Black Moses as a masterpiece; not only does the piece harken to the works of Dickens and Twain, but it also builds on those legacies in a timeless way.