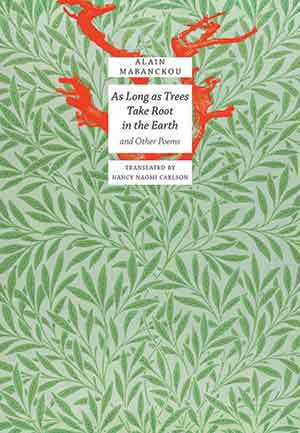 ALAIN MABANCKOU, a native of the Congo and a longtime professor at UCLA, is one of the world’s leading francophone authors. If you’re the author of a novel (Verre cassée/Broken Glass) that The Guardian has called one of the best one hundred novels of the century, it may be difficult to be taken as seriously as a poet. And yet Mabanckou has also been publishing books of poems since 1993 (see WLT, Sept. 2016, 67). The present edition includes two of his most recent volumes, the first and only translation of any complete poetry books to be published in English. I, for one, am grateful, and I imagine others will be also.

Mabanckou seems to be a poet of two dimensions. I do not mean that he is two-dimensional, only that his poetic practice has both a polemical aspect, which engages the politics of the poetry world, and a more personal but still outward-looking aspect regarding his own relationship with the African homeland he left, first to study in France and then to teach in the US. “The space of a length of time / fits on a tenuous thread,” he writes, and that “thread” applies not only to his own life but to the geophysical life of the planet. To put it another way, his polemical task is to save the kind of poetry that he favors, which is francophone and African, from being “killed” (his word); his other labor is to recognize and preserve the “silent intonations of nature”: in this practice, his is an ecopoetics. The question is how these two concerns are related.

What is killing poetry, Mabanckou argues in his “Open Letter” (included in the present volume), is the stranglehold Parisian publishing has on poetry production because of its single-minded support of old-fashioned formalisms involving meter, rhyme, and subject matter. He names names and points fingers, and at the end of the day his claims are succinct: (a) that francophone poetic practice may be a new source of imaginative energy for French verse, and (b) that contemporary poets have much to learn from prose fiction, especially by investing more in narrative practices. In this, although he does not use the reference, he recalls Cesare Pavese’s advocacy of poesia-racconto, the idea of “poem-stories.”

One recurring tension in Mabanckou’s lyrics is between what he calls “the birth record of borders” and the need to leave those borders, as he himself has done, and fashion new stories. Mabanckou profoundly sees himself as a native son; indeed, the two volumes here could easily be called “Notes of a Native Son.” It is important to remember, however, that the “borders” of his native land have changed dramatically even before and into his own lifetime, moving from colonialism to civil war, and yet “I remember / our tight family ties / our entangled roots / our family tree / a succession of glorious ancestors.” The poet will risk discursiveness here, and a rather shopworn tree metaphor, so as to emphasize the idea of “succession.” You may leave that place for a host of reasons; returning, though, is not just desirable but necessary: “who can resent the migratory bird / for rising above its nest // don’t change your name / don’t change your branch // remain human until the end / as long as trees take root / in the earth.”

That last clause furnishes a refrain to both these books, but the mention of what is “human” and the glancing reference to “the end” turns this from a local meditation to a more cosmic one, summoning the whole anthropocene hubris. The crisis is that the local is the cosmic. There is no “other world,” one poem asserts, adding that “freedom is on this side,” the English phrase recalling not spatial separations so much as political and martial ones, being on one side or another of a debate or conflict. The poem concludes: “the other world is the last of utopias / standing amidst the winds / here Paradise reaches its end.” Now the word “end” returns and means that what we have here is hopefully not the end of what we have.

How Mabanckou tries to compensate for the loss of this native place would require a much longer review of this provocative and accomplished publication. Especially moving, however, is the series of poems that speaks to the personal loss of his mother and of her mother tongue, a language he has, if not lost, then at least displaced by his adopted European language. In his own French, he ventriloquizes her absence: “not knowing how to read / or write / I sign this with an x / and speak in my own voice / through the trance I breathe / into the scribe that you see here.” I feel my own sense of loss that the scribe you see here is not rendered bilingually, even though a number of the poems in the volume were first published in journals with the French facing. I regret this because it would let us see more clearly the sometimes brilliant, sometimes necessarily restrained choices the translator has made. I conclude with one quick example.

A typically terse five-line poem looks to be about the wind (voici que le vent aussi parle), which, it turns out, is blowing leaves (les feuilles s’envolent), a rather underwhelming image even when the Romantic-sounding personification of a “speaking” wind (le vent . . . parle) picks up. Between those two words, though, the word “also” (aussi) links this sentence to previous lyrics about a rejuvenative force that here, now, starts to sound like a neo-Shelleyan cyclonic turning of the seasons, of old into the new. Except it doesn’t. The leaves, although they are “proclaiming the news” in Carlson’s translation, remain leaves and are swept along by the current, ending “in the swirl of the falls.” That is a thoroughly apt translation. It is also—intentionally, I think—a dramatically understated rendering of what happens. In the French the blowing leaves “annoncent la nouvelle,” and the stream’s current (la courant) carries them “dans le tourbillon des cataractes.” But “la nouvelle” is not simply “the news,” as Carlson translates; it is also “the new,” as much in the Poundian sense of “make it new” as in the journalistic sense of a mere news report. “Courant” is certainly a stream or current, but it also implies what is ordinary, quotidian, everyday. And “swirl” certainly translates tourbillon, but everything about the etymology suggests more turbulence, a whirlpool and not just a “swirl,” something the leaves are transported into (dans, which can also just mean “in”). And it is a shame that English has lost the word “cataract” as a synonym for “waterfall,” for to use it now would be “poetic,” though it wasn’t for Wordsworth: “The cataracts blow their trumpets from the steep.” My point here is that the French suggests but doesn’t articulate a more apocalyptic possibility. Therefore, Carlson’s correct translation is probably the better one because the sounding trumpet of that other possibility, with its cyclonically swirling water, is only hinted at. To tap into it here, where the English stands alone, would provoke a violation of Mabanckou’s own tonal restraint, his deferral of symbolism.

To say I would prefer the tonal urges of the French, though, is not to criticize the translator’s plainspoken choices. On the contrary. I only hope to show why publishers should do whatever they can to produce bilingual editions as a benefit for us all—author, translator, and reader.