A Silent Fury: The El Bordo Mine Fire by Yuri Herrera 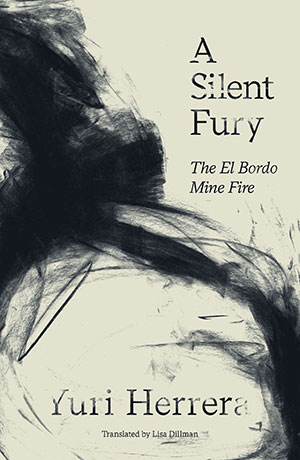 I’D READ TWO NOVELS written by Yuri Herrera before A Silent Fury. They were both masterpieces of brevity. The restraint and insinuation that popped out of what wasn’t said gave a heavy feel to the surreal stories. It let you fill in the blanks, made you a co-conspirator.

His current book (not a novel) is similarly stripped, but to different effect. It details the tragic story of the El Bordo mine fire of 1920. Herrera pores over documents to piece together what exactly happened, and the results are infuriating. He starts with the aftermath of the fire, in which the families of the deceased have to prove their relation in order to receive a payout. To start off with the pettiest of indignities sets the tone for the rest of the book, as we are given a step-by-step account (as far as the documents can say) of what happened on March 10.

To repeat the rest of the action of the book would feel too much like spoiling it, short as the book already is. Suffice it to say that the Mining Company needlessly ended nearly ninety lives by closing the door to the mine before everyone could get out. Once they’d done that, they lied about the number of the dead and set about covering up their responsibility for the accident, for those deaths, for anything. Well, “covering up” might be putting it incorrectly. They don’t have to “cover up” much when they controlled the inspectors sent to assess the damage, to see if a crime had taken place, to place blame.

What Herrera has done is demonstrate the callousness of these operations and the people who ran (and run) them. It happened recently, only a hundred years ago. The workers had no recourse, no way to empower themselves, and as such went to work every day with the possibility that it could be their last. Some literally died nameless, and others weren’t even given a proper burial, just a vague monument, about which Herrera has the most to say. It’s a powerful story and also a metaphor for working people and people of color all throughout the history of Mexico and the US.

Herrera is one of the best writers of our time, and his decision to give us this stripped-down account of the tragedy in Pachuca is smart and devastating. It rolls in quickly and leaves you reeling.