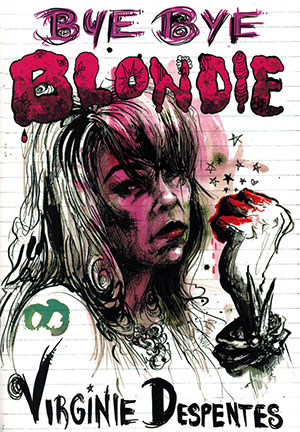 An aging punk named Gloria comes face to face with her own past in Virginie Despentes’s latest novel, Bye Bye Blondie, but her destructive romance fails to transcend the indulgent self-destruction and arrested development that defines the main antiheroine.

Gloria has just been kicked out of her latest boyfriend’s house after another signature outburst when she bumps into Eric, a television star who happens to have been her teenage boyfriend. After meeting in a psychiatric ward, Eric and Gloria were darlings of Nancy, France’s punk scene in the 1980s; one of their earliest “dates” included fleeing from the police after a bar fight with skinheads. But in the wake of their relationship’s catastrophic end, the two splintered until fate brought them back together twenty years later. While Eric found fame and fortune, Gloria still looks back on the glory days of their young love—an idyll she wants to capture in a screenplay as the two struggle to find a new foundation for their rekindled relationship.

Originally published in French in 2004, the novel plays with interesting themes, and the premise poses fascinating questions about growing into different people over time. But Gloria’s punk attitude and inability to alter her own destructive behavior reads less as complexity and more as immaturity. She’s a difficult character to like but an easy one to pity, wound so tightly in her own anxieties and insecurities that she can’t seem to move forward. The cycle of self-sabotage and anger that Gloria exists in quickly becomes draining, and although the ending is satisfying, the novel puts the reader through the ringer before offering it up as a lackluster consolation.