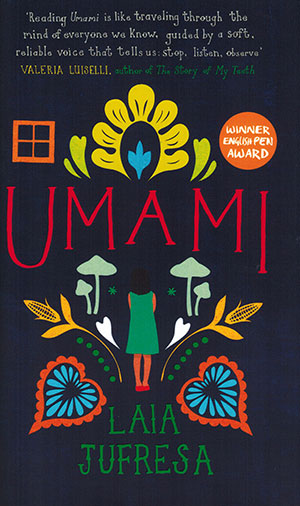 The English translation of Umami, by Laia Jufresa, is a thoughtful, eccentric, and heart-wrenching interwoven story told from the perspective of neighbors living in a mews of five houses in Mexico City. The five houses are named after tastes: Sweet, Salty, Bitter, Sour, and Umami. Umami tells the stories of characters who are dealing with mortality, abandonment, and loss.

There is insight into the life of Alf, who owns the property the neighbors live on. He lost his wife, Noelia, to cancer, and he mourns and celebrates her on a daily basis. He writes into his laptop religiously about Noelia, and he cares for her reborn children (three dolls), who were left behind as though they were alive. Ana, who lives in the Salty House, is a bright and ambitious preteen who wants to learn how to create an urban garden. She wants to dig into the soil and make something meaningful grow.

Pina, who lives in Sour House, is Ana’s best friend and a belligerent preteen. She has not been in touch with her mother for three years and longs to find the mysterious letter her mother left behind. Marina, who lives on her own in Bitter House, is a twenty-one-year-old woman who collects junk, detests food, and makes up names for colors (e.g., “Graycholy, when the sky is a bit gray and a bit melancholy”). Finally, there’s Luz, the youngest sister of four who used to reside in the Salty House. Luz was five years old, although she repeatedly exclaimed she was “almost six” when she drowned in the lake where her grandfather’s ashes were spread.

Jufresa writes from the perspective of Luz and impeccably details her complexity, enchantment, and eloquence as she interacts with the environment around her. Jufresa crafts a story with warmth and tenderness but also gives insight to the uncanny human talent of engaging in cruel and awkward behavior. Some of the stories told are playful and light, others are tragic. Umami is quirky, insightful, and ultimately tells the stories of humans coping with living next to one another in order to feel less isolated and alone.