Scattering the Dark: An Anthology of Polish Women Poets 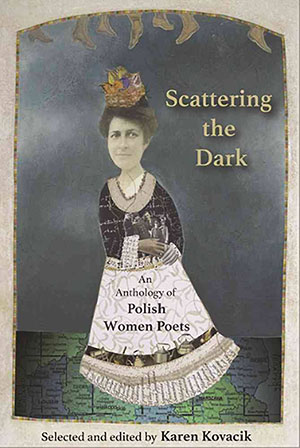 It was not until Wisława Szymborska won the Nobel Prize in 1996 that Polish women poets began to achieve national as well as international visibility. According to Karen Kovacik, Poland’s top literary prizes had always gone to men, so the Swedish Academy’s decision took the Polish male literary establishment by surprise, some even suggesting that it should have gone instead to the leading male poet, Zbigniew Herbert. Kovacik has set out to overturn the traditional gender imbalance inherent in Polish literary and artistic culture by assembling the translated poems of thirty-one Polish women poets in a thematic volume with subjects ranging from history and mythology to dreams, ars poetica, and domesticity. What is energizing about this collection is its introduction of so many new, vibrant voices, though the momentum is undermined by the constraint of the thematic arrangement, which inhibits the reader’s impulse to contrast and savor individual poetic styles.

The boldly ironic tone and subversive, experimental spirit that enlivens this collection suggest the sense of liberation that Polish writers of both genders have felt since the fall of communism in 1989. Yet the awareness of past suffering is never far below the surface: “I’ve made room for death in my life, / peeled back the sheets and my shirt, unlocked my rib cage,” declares the speaker of Justyna Bargielska’s “Translation.” And a short poem by Julia Hartwig is memorably composed of a conversation between women seated around the table of a café as they enumerate the torments they endured during wartime, each new addition worse than the last—Hartwig closes her poem with the wry summary statement, “Some ordinary women from Warsaw.”

The majestic ease with metaphor that is the hallmark of Poland’s greatest poets is apparent throughout this anthology. The speaker of Ewa Parma’s “Old Woman Poet” notes that women poets do better in old age than male poets: “rather than standing over the abyss, you nestle into it.” And Agnieszka Kuciak’s “Wroniecka Street Pool” portrays a boy in a pool brimming with ghosts from the concentration camps; he finds comfort in the imagined voice of his mother, who likens the act of swimming to praying: “Swimming, we keep folding and opening our palms / As if in prayer, like when we say the psalms.”