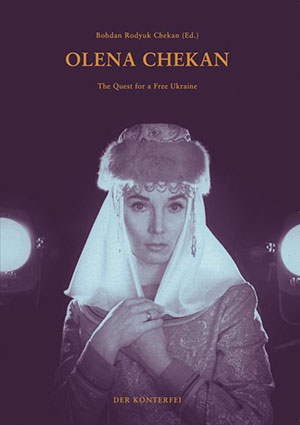 Ukranian actor and journalist Olena Chekan died of a brain tumor just as protests calling for a freer and more democratic nation were erupting in 2013. In the introductory texts, her son Bohdan Rodyuk Chekan, publisher Robert Yelinek, and political expert Andrey Okara not only give biographical information and appraise her work but also describe the historical context of Ukraine—from the time of its independence to its current struggle against Russian expansionism. To honor his mother, Bohdan Chekan convinced Yelinek to publish this book, emphasizing his mother’s role as a journalist at the Ukrainian Weekly newspaper. As Okara writes, “She stood at the beginning of the new Ukrainian journalism in the 1990s” (see WLT, March 2012, 45–49).

Thus, they selected eleven interviews Chekan conducted between 2010 and 2012. Her interview subjects are internationally known personalities from politics and cultural life, including the philosopher André Glucksmann; the writer, dissident, and president of Czechoslovakia and the Czech Republic Václav Havel; Putin’s opponent Boris Nemtsov, who had been murdered four years after his interview with Chekan; the premier-in-exile of the Chechen Republic of Ichkaria, Akhmed Zakayev, as well as others, including a KBG agent, a German historian, a Polish filmmaker, and two musicians. Ukraine and its people are always Chekan’s main focus—in relation to Russia, to Europe, to other oppressed or formerly oppressed nations.

These interviews not only reveal the attitudes and characters of those interviewed but give a clear understanding of the woman asking the questions. The writer and dissident Igor Pomerantsev characterizes Chekan as follows: “She didn’t just ask her questions during the interviews, she was talking with her heroes as if it was a private conversation.”

It is original and exciting for the reader to get to know Chekan via her work instead of choosing the approach of a comprehensive biography. The diverse and carefully selected interviews are informative and make the reader want to learn more about Chekan, about her interview partners, and about Ukraine.