Memories: From Moscow to the Black Sea by Teffi 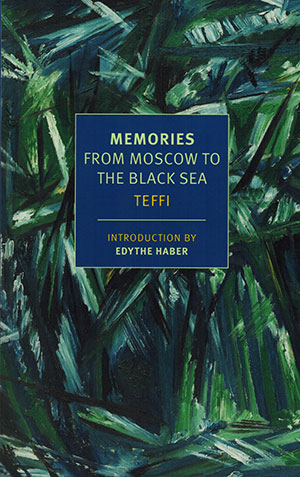 In this memoir-cum-travelogue, Teffi, an immensely popular early-twentieth-century Russian satirist, tells of her chance escape from the throes of revolution and war in her motherland. It’s 1918 and Teffi and some fellow artists are whisked out of Moscow on the pretext of a traveling show by a couple of talented impresarios with the foresight to see that the farther they can get from the Bolsheviks, the better off they’ll all be. As they bumble their way through border crossings, shortages, disease, and utter confusion, Teffi shows her knack for homing in on and exploiting the details of banal occurrences as a way of highlighting the absurdity of the tragicomedy she and her compatriots are living in.

Traveling from Moscow through Kyiv, Odessa, Crimea, Novorossiisk, and eventually Constantinople by carriage, train, and ship, Teffi applies her sharp wit to the chaos and collapse around her: after barely escaping German soldiers, her group is most afraid of being bored, stuck in a small Ukrainian village; sick with pneumonia in Kyiv, she is elated that she’d fallen ill and proven herself right; an encounter with a young Petrograd acquaintance posing as a stoker on a ship leaves her with a spot of soot on her hand and the certainty of his impending death.

Against the background of total ruination, ordinary calamities are viewed in a different light; “utility above all” becomes a maxim that dissolves former notions of propriety. Yet Teffi is not so much profaning the sacred as she is showing that the sacred had vanished way before she put her pen to paper, that the everyday has long been profane. And because she is the one bearing terrible witness to it all, she is able to reinsert a sense of awe at both the human decency and beastliness she encounters.

For all her sardonicism, Teffi still observes, “A joke is not so funny when you’re living inside it. It begins to seem more like a tragedy.” Memories can be read as a humorous account of a bungling, ill-planned journey across an enormous Eurasian bureaucratic stain. Or it can be read as a warning and testament to the nightmare of revolution and the inevitable destabilization of already precarious lives. Or it can be read as both.