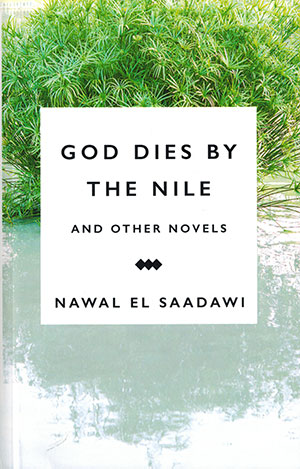 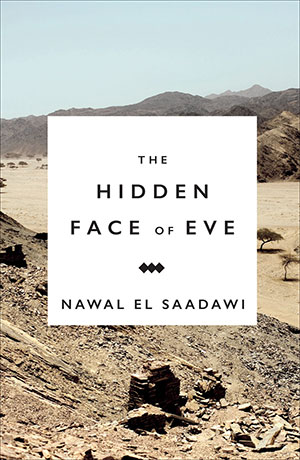 In a 2012 interview, now eighty-four-year-old Nawal El Saadawi confessed that “I’m proud of myself. Not because I did fantastic things, but because I never changed. People usually compromise. I’m proud because I didn’t compromise.” Her insistence on sharing her view of the truth on the condition of women, religion, and politics is the key to the continued interest in her works. She doesn’t compromise because in many ways the condition of women in the Middle East has not changed much and because there is an ethos that, she believes, demands interrogation.

Zed Books of London has recently reissued God Dies by the Nile and Other Novels and The Hidden Face of Eve. Speculation on why these particular works were selected given El Saadawi’s large canon leads to the idea that in some ways, all her themes and concerns are found in the four newly issued works. Many of her themes (both fictional and nonfictional) center on a debate about justice. In her polemics, justice cannot not exist without equality—equality for the poor, women, and among social classes.

Having survived several repressive regimes as well as the so-called Arab Spring, El Saadawi firmly situates herself as a writer for social justice. She insists that it is her job, as a writer, to expose the truth about cultural patrimony and religious fundamentalism. The Hidden Face of Eve (first published in Arabic in 1977 and in English in 1980) is perhaps El Saadawi’s most well-known work apart from the novel Woman at Point Zero (1983). It became an instant sensation and continues to draw readers because it addresses the psychological and sexual problems of women and men she encountered during her medical practice largely in rural Egypt. It is believed to represent a microcosm of women throughout the Arab world. Unfortunately, readers tend to be trapped by the cultural practice of female genital cutting above all other issues presented in the work.

God Dies by the Nile (1974; Eng. 1985) is set in a small village on the banks of the Nile and explores the corruption of government officials who victimize the inhabitants of the small village. By turns, women are most easily marked as the target of such corruption and suffer immensely. That women suffer in her works is a given, but an examination of the nature of the suffering is what is placed in the foreground.

Searching (Eng. 1991) features an illicit affair between a young professional woman and her writer lover who, as the story opens, has abandoned her. The poignancy of betrayal is explored in this work, and both the reader and the central character come to learn that “things may seem to happen without reason, but sooner or later a reason becomes apparent.”

The Circling Song (Eng. 1986) is the first-person, dreamlike account of a story touted to be true. A young girl is sexually abused by a male relative and becomes pregnant. What befalls her next is said to be a fate of village children all across Egypt, and what strikes readers as starkly morose is the avenger of the family’s honor.

El Saadawi never strays in her writing from the insistence that dichotomies merge. Critics tend to offer sociological responses to her works as opposed to literary ones. That is, the problems and issues she portrays are lifted to the level of sociology for any number of reasons. Yet exploration of her craft, her art in fiction writing, suffers principally because her works (though published in English and made more accessible) are not formulaically Western in outlook.

El Saadawi’s dreamlike accounts, square-bodied men, disdain for ministries, and penchant for combining fiction with fact, the urban with the rural, science with art, and the rational with the nonrational, among other disparate combinations, are her hallmarks. Her works are born in Arabic and necessarily bear something of the cultural impulses and cosmology inherent in the language. The recent reissuing of her novels provides the perfect opportunity to merge the seemingly disparate forces in her art.