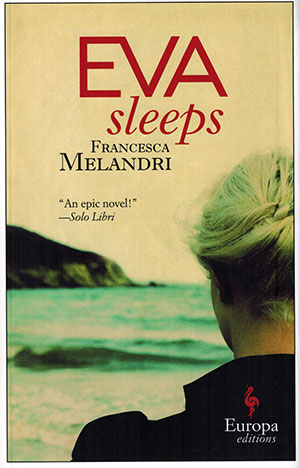 Given that Francesca Melandri’s novel Eva Sleeps has received such critical acclaim in Italy, it is no surprise that a narrative with such far-reaching themes and situations is set to become a film project in the near future. This is a book that realizes the full implications of what it means to love. That is, when one experiences love, one must also feel the loneliness and chaos that surround such a flight of heart—and most often, love happens when it is the least expected or convenient. In this new English translation, Katherine Gregor is able to capture the many nuances of the Italian language, all the while pushing Melandri’s text to an even larger audience.

The situation of this novel is complex—one that covers many years, locations, and characters. Despite the fact that much of this narrative is removed from our current time frame, what is told is still entirely relevant to a contemporary readership, as there is strife and political unrest in the backdrop and even a character whose brother is a known terrorist. Had I not known that this novel originated in Italy, I could have guessed its origins were from any number of places. The themes and situations involved speak to the human experience and place the reader within its milieu quite organically. It is no wonder that such a universal narrative should be made into a motion picture. Now we are just left to wonder who will be chosen to play these characters.