Eve Out of Her Ruins by Ananda Devi 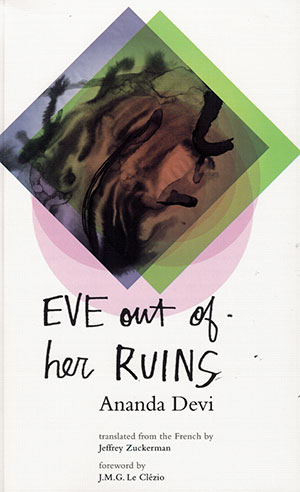 When tourists visit the island of Mauritius, located off the east coast of Africa, they see gorgeous beaches and luxury hotels and not the hopelessness and misery that lurk behind the scenery.

The desolate, poor, and often-violent lives of the island’s inhabitants are exposed in the stark and lyrical prose of Ananda Devi’s brief and revealing novel. The story is related in the alternating voices of four characters, all of whom are teenagers from the Troumaron section of Port-Louis. Eve is the strongest voice among the four narrators, and most of the story is told from her perspective. Devi’s Eve is a strong female character who is not willing to accept the abuse and violence to which women in Mauritius are subjected.

At a very early age, Eve learns that she can manipulate men by selling her body in exchange for things that she needs. She starts by exchanging sexual favors for books and supplies in the schoolyard, but as she gets older, the abuse that her body takes from men becomes more severe. Eve believes that she can separate her physical body from her mind, and these sexual encounters become out-of-body experiences for her.

The other three characters in the narrative serve as a supporting cast who are all in some way connected to Eve. Like Eve, they all have an overwhelming desire to escape their desolate island home. Saad hangs out with the local gang of boys, but his talent for writing poetry separates him from his peers. He is desperately in love with Eve and wants to forge a relationship with her and save her from her reckless behavior, but even the beautiful poetry that he writes for Eve will not convince her to trust him.

Savita and Clelio are the final two supporting and antithetical characters in the story. Savita, who encounters a sick and suffering Eve in the schoolyard, is the first person in Eve’s life to treat her with love and kindness. When they are together, they have the ability to completely shut themselves off from the rest of the world. Clelio, by contrast, is constantly battling his temper, which he can barely contain, and he has been sent to jail many times for fighting and theft. Clelio is the epitome of everything that Eve resents about the men of Mauritius.

The interwoven fates of these four characters come to a shocking and tragic end. Eve learns too late that she cannot sell her body without expecting to suffer any negative consequences. Devi’s trenchant yet terse prose perfectly captures the lives of these sad and forgotten outcasts from this small island nation.