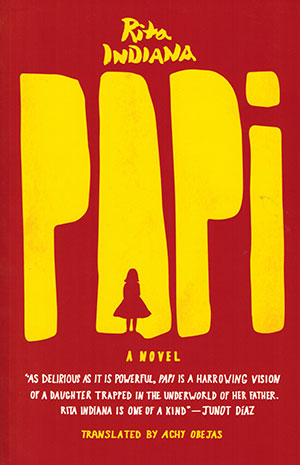 In “Ain’t No Sunshine” by Bill Withers, the performer sings “I know” a remarkable one hundred-plus times. Surprisingly, the repetition of these lyrics does not tire his listeners but instead entrances them. The same could be said of the eponymous Papi, who receives his own mesmerizing incantation upon every page. The narrator, his young daughter, repeats “Papi” like a mantra, spell, or rosary. His name takes on a supernatural power; it represents his daughter’s immense belief in him no matter the length of his absences.

Rita Indiana artfully shows that invoking Papi on the page takes more than the usual level of craft, writing or otherwise. As the narrator waits for her father’s visits, her imagination about the presents Papi will bring her turn into wild embellishments of his wealth and power. Like a folktale, she says, “Everybody already knows . . . you’re coming home in triumph, a big shot with more gold chains and more cars than the devil himself.” Reality and fantasy blur and unite until what comes into focus is the image of Papi the narrator would like to see. Often what Papi can offer in gifts is what the narrator outwardly celebrates, while in the background she drops hints of days, weeks, and months spent waiting for her father to return.

The narrator never lingers over her disappointment in Papi, though. She explains this by comparing Papi to Jason from Friday the 13th: his appearances are always unexpected, and he always comes back. Though the narrator appears somewhat aware of Papi’s connection to an illicit lifestyle, he can never be killed off. Papi’s invincibility is a blanket of comfort and denial for the narrator, as she is unable to demonize Papi no matter what promises or laws he breaks.

The world has seen many narratives of absent fathers, but this narrator’s dedication to her father is as charming and lyrical as it is tragic and human. By blending persona and myth, this hyperreal work of fiction potently expresses the pain of an abandoned child. The narrator’s embellishments not only attempt to assuage her own feelings of rejection and loss but also give Papi a thousand chances to live up to her dreams of him. Though the incantation cannot change reality, it still provides a sense of comfort when the dream ends.