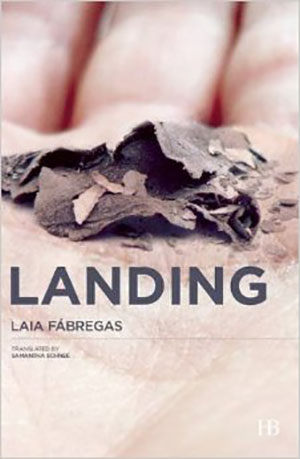 Landing is a multifaceted book, written under two simple chapter headings, “Her” and “Him,” alternately throughout the book. These chapters develop the individual characters and allow the parallel stories to unravel little by little. The novel can be read from the beginning chapter starting on page 5 straight through to the last sentence of the final chapter or by following each character in their alternate chapters. Either way works and both ways add meaning to the title of the novel as each character searches for his/her ultimate destination, getting on or off the train/plane at the appropriate moment in their life’s trajectory.

Landing follows two sets of episodes of their characters’ lives. These are two distinct people who meet on the first page without realizing their parallel connections, searching for answers to their lives’ questions. She, a Dutch woman, travels often to Spain in her quest to find the “angel” who pulled her out of the burning family car. He, a Spaniard, traveled to Holland searching for work in the mid-twentieth century. On their first meeting, both are on their way back to Holland, she after yet another unsuccessful trip and he after many years away from the country where he met his wife, now deceased. She is the child of parents killed in a car accident, and he is the father of a son with connections to that child, unbeknownst to either of the principal characters. The juxtaposition of the loci is woven cleverly into the fabric of the novel.

The reader sees the connections that the female character misses. She has a list of one hundred names. She finds and visits these names in her attempt to find her “guardian angel,” but his name is not even on her list. She takes a small wooden box from the male character as she leaves the plane in Holland, and this box is the catalyst that brings an end to her search. The reader solves the riddle that she is unable to recognize.

I enjoyed this novel. It bares the souls of the two principal characters and gives the reader the insight to empathize with one character or the other or with both of them. The peripheral characters are like familiar members of our own families. The twists and turns of family politics and arguments remind us of similar situations in our own families.