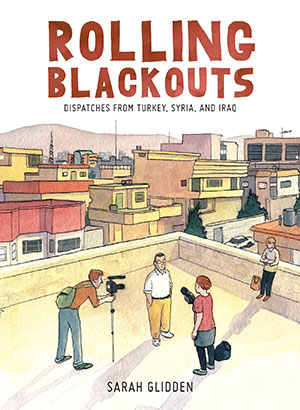 Despite their constant presence in the news, the countries traversed in this welcome graphic docu/memoir are still as alien to many North American readers as they are to the independent journalists depicted in these pages. Sarah Glidden’s project is twofold: to try to define journalism on her travels as an observer and to record the human fallout of the Iraq War in the region.

In 2010 she accompanied several journalists in the Seattle Globalist coalition, who wanted to cover stories ignored in the mainstream media, on a two-month trip to the Middle East in order to document their trip. Also traveling with them was an American college student, Dan, who had done a tour in Iraq. The potential conflicts, both personal and political, in the little traveling group quickly become apparent.

Glidden is both documenting the trip and recording her own interactions—hence my sobriquet “docu/memoir.” There are also sections where she provides necessary historical background and relevant contemporary statistics, filling the reader in on the context of the situations the roving journalists encounter. As Sebastian Meyer, an American photojournalist they meet, says, “If you’re a good journalist with good ethics, you give it context. If taken out of context it would be incorrect, then you don’t tell it.” This discussion of journalistic ethics and practices runs throughout the texts and panels and is clearly the didactic thrust of the book.

The drawing style is simple and even naïve, with an occasional beautifully rendered landscape or fabric. But the characters are vivid—with snippets of text and mostly two-dimensional drawing, Glidden manages to elaborate some complicated encounters. The group meets many Iraqi and Kurdish refugees, including Sam, a Kurdish man who had served in the Iraqi army and deserted. When Saddam went in search of Kurdish deserters, Sam fled to Iran where his wife eventually committed suicide. He then took his baby daughter and went to Pakistan, which accepted him as a UN refugee. He remarried, had another child, and was approved for resettlement to Seattle, but when he applied for US citizenship after five years, he was deported because of what he called unjust accusations. His story has many holes—was he caught up in something he didn’t understand, was he used, or is he a terrorist? All he wants is to be reunited with his family, who are still in Seattle. Who is the bad guy here? This complex story, with no resolution, is one of several, and it illustrates the kind of story the reporters are seeking to place in context.

There are many touching moments and the kind of ambiguity that comes with people’s lives and rationales, especially with the vet, Dan. Along with telling moving stories, Glidden does an excellent job of drawing our attention to the successes and pitfalls of journalism—in fact, this book—which begins and ends with the question, “What is journalism?”—could function as an innovative journalism textbook.