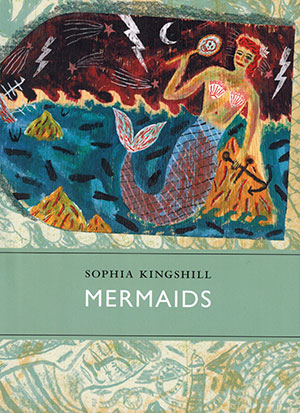 For many children in Western culture, the first introduction to mermaids is via Disney’s cheerful cinematic adaptation of The Little Mermaid or depictions derived therefrom. But even a little exploration reveals that the original story as told by Hans Christian Andersen (not to mention earlier variations) was far darker. In fact, mermaid mythology has an ancient, complex, and haunting history. As a folkloric figure, the mermaid continues to hold a powerful sway, though we are often at a loss to explain why. Sophia Kingshill explains that “it’s always a risk to meet a mermaid.” Beginning with an intriguing and recent mermaid depiction in Madrid, Kinghill explores the background and many incarnations of the mermaid myth around the world, accompanied with gorgeous photos of paintings, sculptures, and engravings.

The mermaid has been everything from temptress to wicked monster to healer to soulless creature yearning for immortality. At times she has been described as part serpent, fish, vapor, or bird; in some instances, she transforms completely into a seal or porpoise. The author carefully compares and describes the various incarnations and relatives of the mermaid, including the siren. Tellingly, the mermaid often represents wild freedom and independence, perhaps indicating why, after thousands of years, she continues to speak to land dwellers, and why she has a distinct feminist appeal. As Kingshill points out, “Never does she elect to stay on shore.” In the chapter “Mermaid Wives and Other Folklore,” Kingshill navigates several stories that describe a beautiful woman marrying a human man, often after he has stolen an object from her, only for her to return to the sea years later.

Whether the reader is a fan of art history, folklore, feminist history, or mermaids specifically, Mermaids offers an engrossing but accessible study accompanied by photos of art from all over the globe, spanning centuries. One of the most powerful pieces included is Evelyn de Morgan’s Sea Maidens (1886), depicting a “marine sisterhood as mutually supportive, neither coy nor menacing.” Mermaids is a fast read but one worth revisiting many times.