Memoirs of a Polar Bear by Yoko Tawada 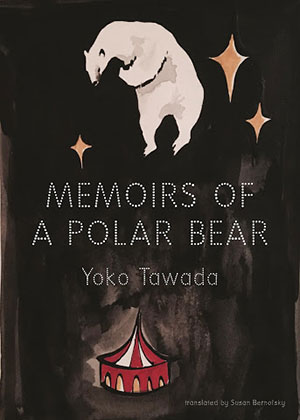 As acrobatic with her writing as her polar bear subjects, Yoko Tawada walks a line between fantastical yet believable. Her novel Memoirs of a Polar Bear is her circus showcasing this amazing feat of balance. The author fills the audience with expectations and then fulfills them in unexpected ways. While the bears are celebrated, it is not for their acquired ability to navigate human society, for this seems somewhat commonplace. The atmosphere is curated with precise details, yet the end result is vague and open-ended. These contradictions highlight Tawada’s skill at manipulating language to seem that she is revealing more than she is. And, like any good presentation, it leaves the reader wishing there was more.

The opening act tells of the grandmother, as she is never referred to by name. After spending years in the circus, she retires to an administrative position, which allows her to pursue her ultimate quest—recovering memories from childhood, and perhaps beyond, through writing her autobiography. The following chapter describes the bond of her daughter, Tosca, to her trainer and their pursuit of shared goals. The final act is on the grandson, named Knut, who struggles with his place in the world between bears and humans.

Each bear’s tale is different, though themes recur among them: performance and celebrity, isolation, ancestral connections, the desire to tell a story, and yearning to know where you come from and who you are. Though each of them feels human, and sometimes you might forget they aren’t, they are very aware of their bear-ness. At times, we are mammals and are mostly similar, sharing common struggles. Others, they are bears and their difference from humans is palpable, for better or worse.

Tawada weaves these bears together with more than their bloodline, using breadcrumbs of sequences, floating between real worlds of past and present and the unreal of dreams and phantoms. The novel at times feels tangential and long-winded, only to thrust you back into the true setting. The more unbelievable elements are never directly addressed, such as how and why the bears learned to speak and walk bipedally. Instead, they are openly mused on and discussed in meandering ways. Tawada’s polar bears are ultimately intriguing and relatable companions for a foreign journey.