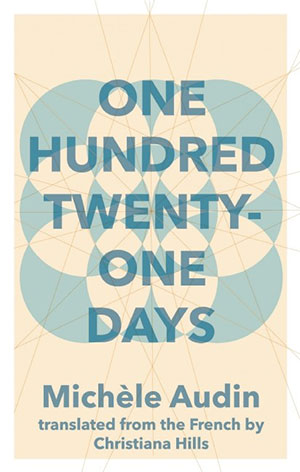 One Hundred Twenty-One Days, the debut novel by mathematician and Oulipo member Michèle Audin, is truly the sum of its parts. Each of the chapters comprises a different genre: private journals, newspaper clippings, oral-history interviews, research notes, and so on. Translator Christiana Hills deserves praise for re-creating the range of voices, styles, and eras in English while maintaining a distinctly French air.

The various chapters make up the primary material for an unnamed historian attempting to piece together the life of polytechnician Christian Mortsauf, whose surname morphs anagrammatically throughout the novel, another mark of Oulipo play. It would be a shame to divulge details about the plot and characters and rob from the reader the pleasure of excavating and reconstructing the narrative alongside the historian. Suffice it to say that the novel follows the lives of mathematicians and other scholars—some Jewish, some not—as they survive—or not—the two world wars.

Some chapters and genres draw in the reader more than others, and none more than the titular chapter whose aching story haunts the rest of the novel, kindling hopes that the research has failed in some way and history might be put back together again otherwise. While this chapter is in straightforward prose, another called “The Numbers”—an ascending list of dates, figures, and mathematical constants—also proves surprisingly gripping, cataloging with painful precision all that has come before: “479 is a prime number and one quarter of 1916 / 491 men and women from Convoy 60 were taken by SS officers and dogs and immediately gassed / 600 barricades were erected during the Parisian uprising.” With powerful effect, Audin demonstrates that math can be both poetic and political.

Despite all the numbers, One Hundred Twenty-One Days contains very little actual calculation or mathematical theory, which keeps it accessible to lay readers. Rich with the sciences, history, and literature (with sustained references to The Inferno and Faust), the novel’s interconnected stories still remain deeply human. Beyond all the myth and the math, Days prompts the unsettling question: Once it’s over and gone, what does a life really add up to?