Sleeping on Jupiter by Anuradha Roy 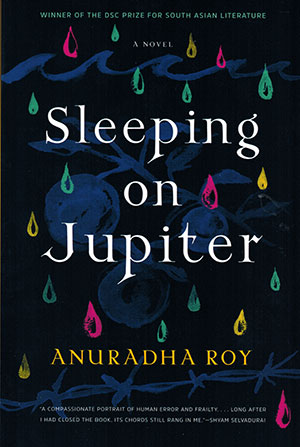 In this third novel, Anuradha Roy explores the lingering trauma of childhood sexual abuse in the psyche of a young Nomita. Nomi, a child victim of civil strife in an unspecified northeastern state in India, is orphaned, rescued, and then abused by a god man, “Guruji,” in an ashram. She escapes and is adopted into a Norwegian family, who returns to contemporary India to make a documentary about temple festivals, and Nomi is able to make peace with her past. It is also the story of a young temple priest, Badal, secretly in unrequited love with Raghu, an errand boy in a tea stall in the seaside temple town of Jarmuli in India’s hilly and coastal northeast.

Thus this is a “social problems” novel that has made two taboos of Indian mainstream culture—sexual abuse of children and homosexuality—its central plot. The plot is developed through episodic, cinematic cuts between the past and the present with each scene centered around a diseased memory in the psyches of its main characters, which also includes three elder women—Latika, Vidya, and Gouri—who befriend Nomi on the train. Nomi’s assistant, Suraj, a frustrated filmmaker with seemingly progressive views and a hidden violent temperament, is the final member of this ensemble cast.

The narrative describes in vivid detail, at times with shocking relish, violence against women, children, and even animals, as in the episode where Suraj beats up a dog, which lends a certain hyperbolic and gratuitous tone to Roy’s otherwise precise ear for measured prose and careful characterization. Even as a foreshadowing of Suraj’s “male” violence against women to surface later in the story, such scenes create an artificial distance between the reader and the characters. There are also certain culturally underdeveloped references as in the description of a grand Maha Sivaratri celebration in the climax of the story in a Vishnu temple. Vaishnavites usually do not have much commerce with the Saivites.

To alert readers, Sleeping on Jupiter will certainly bring to mind Fredric Jameson’s contention that all third-world texts are national allegories. It is tempting to read this novel as an allegory of contemporary India with its call centers and violence against women spilling out from the pages of a story into news headlines and vice versa. Even with the constraint of such topical exigencies, Roy tells an engaging story that needs to be told about the ordinary lives of men, women, and children that come and go, as do the waves on the beaches in the great anonymity of India.