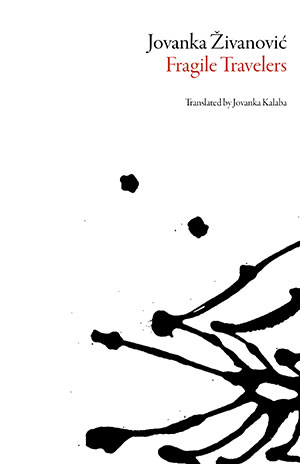 Like many postmodern Yugoslav novels, Jovanka Živanović’s slim debut, Fragile Travelers,mines magical realism in its shifts between, and merging of, reality and fantasy. In its first chapter, “Coffee Lovers Move in Mysterious Ways,” Petar Naumov goes out for coffee and becomes “stuck in” Emilija Savić’s dream. This opening sets Travelers’ tone, plot, and theme: a search for meaning in a soulless global culture that reads like a Woody Allen riff on Kafka.

At base level, name etymologies signify both worlds. Common Slavic names, Petar and Ema, carry spiritual connotations: Peter, the “rock” upon which Jesus built his church; Ema, the universal or whole. Naumov signifies the son of Nahum, a Hebrew prophet, and Savić evokes St. Sava, the Enlightener.

If Ema’s earnest lawyer lover, Žarko, and Petar’s faithful insurance saleswoman wife, Anđelija, contentedly fill their mates’ needs for human love, art historian Ema and successful architect Petar, led by a love of beauty, quest for “their true selves . . . while caught in the snares of middle-class reality.” Thus, at a crucial moment, when each must lecture students on their futures, Petar has one read from Maslow on the need for meaning and self-actualization, while Ema warns that art alone provides the “true path to a higher cause.”

Religious and classical images heighten the spiritual dimension. Evoking Plato, the pilgrims first meet in a cave from whose abyss Petar helps Ema flee to a serene plateau. Ema wears a crown of thorns; Petar feels “crowned.” Petar becomes a “guardian angel,” “savior,” and even “the Jewish God,” while Ema dreams herself pregnant with a python, Delphi’s first guardian—the snake signaling rebirth and eternity.

Several strategies increase the mental play Travelers provides, including irony and literalized metaphors and adages. Thus, for example, alone after his fine new work is unveiled, “something to take my hat off to,” Petar takes off everything and lets his brain run loose, which it joyfully does. Further, while four chapters portray Anđelija and Žarko through an omniscient narrator, sixteen alternate between Ema and Petar, each in first person. But since gender inheres in the Serbian verb form, reading this deft translation means recognizing the speaker from narrative clues.

Appropriately, this not quite divine but delightful comedy ends at a wedding, where the couples exchange greetings. Sustained by their respective earthly loves, platonic soulmates Ema and Petar can now journey between “parallel tracks” to experience both agape and eros.