Half a Lifelong Romance by Eileen Chang 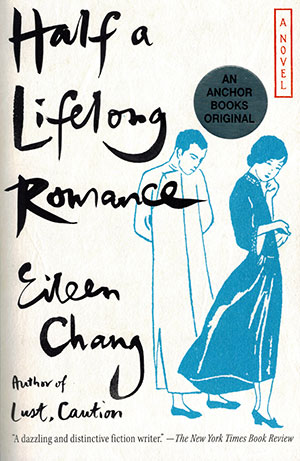 Eileen Chang is undoubtedly one of the most influential writers in modern Chinese literature. Born in Shanghai in 1920, she later moved to America and passed away in 1995. Half a Lifelong Romance, originally serialized for Shanghai audiences in 1948,perfectly displays her prowess as a storyteller. At first glance, the novel appears to be a cliché love story but soon becomes more dynamic and expansive. Spanning more than ten years, the story follows the lives of optimistic characters who are forever changed by the realities of family dysfunction, sexual assault, and war.

The novel takes place in 1930s Shanghai. The main female character, Manzhen, is a pure-hearted young woman who works multiple jobs to support her family. She wants nothing more than to continue taking care of her family and marry her sweetheart, Shijun. Before they can make solid wedding plans, a lustful brother-in-law takes advantage of her. After Manzhen becomes pregnant, her sister and mother cover up the scandal to protect the family name. When Shijun comes looking for her, the family steers him away, and he returns to his hometown heartbroken. His family sees this as an opportunity and arranges a marriage for him. There is a violent shift in the story when the Japanese army occupies Shanghai. Communication becomes scant, families are divided, and lives are lost. The will to survive is strengthened and familial bonds become more important than ever. After abandoning her child and staying away from her family for years, Manzhen gathers everyone back together despite the pain they have brought her. It is due to her compassion that the family is able to survive the years of war.

The world of Half a Lifelong Romance is ruled by desire. Plagued by unfulfilled hopes, each character acts selfishly in an attempt to realize their dreams. In this way, Chang does not create the typical setup of heroes and villains. As the novel dives deeper into the inner thoughts of the characters, the reader will find that although their actions may be reprehensible, their motivations are relatable.

A striking aspect of the novel is the strength and resilience of the characters. This is especially true of the women. Faced with a crushing patriarchy, Manzhen, her sister, and her mother all make sacrifices in order to endure. This lasting spirit despite tragedy not only makes this novel particularly powerful but also ensures Eileen Chang a place in Chinese literary history for years to come.