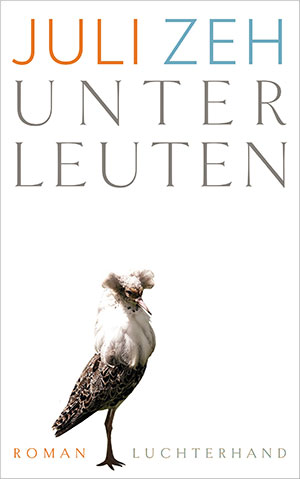 Germany fell in love with Unterleuten, and Juli Zeh’s “great German novel” shot to the top of the fiction best-seller lists. It has stayed there, a popular success despite its hefty size. Or, perhaps because of it: it allows space for a dozen edgily characterized players to take the stage alternately—sometimes in first person, mostly as seen by the narrator. They grow familiar as we follow the winding plotlines, a little like a cast in a soap. The set is a village, Unterleuten (“among people”), that hides in among fir-tree forests on the sandy flatlands around Berlin. A backwater but a place where the villagers, like it or not, feel they belong—a “Heimat.”

This is not a rural feel-good story, however. The author takes no prisoners: Zeh, an ex-UN human rights lawyer as well as a very good writer, is mercilessly observant and well informed, occasionally compassionate, and often witty. Zeh has been engaged in politics (the red-green variety), but here she acerbically dissects what happens to political ideas “at the grassroots level.” The villagers in Unterleuten share generational memories of violations in the name of politics; staying below the radar is part of their way of life. Now, in 2010, a plan for a commercial wind farm is enough to trigger unrest: everyone knows that European Union directives can cause as much trouble as any communist or capitalist articles of faith. Worse, metropolitan Germany is taking an interest: a Bavarian plutocrat is scheming to exploit his chance purchase of 250 local hectares, and middle-class Berliners are chasing nice property deals in their rustic hinterland.

Throughout, fields, meadows, and forests are silent but potent presences. Villagers and incomers alike are driven by a deep-rooted, almost physical need to possess land, to “fence off one’s own piece of the world.” Acquiring ownership justifies the means, and when mendacity and betrayal fail, there is always violence. Brutality surfaces in many forms, from harassment and deliberate cruelty to perverse acts of revenge. Two old men, a successful agribusinessman and a displaced comrade from the one-time DDR farming collective, reengage in past conflicts, and their twenty-year-long feud grows into a prime source of vicious ill feeling. Neither man is a monster but both die, one bitterly disappointed, the other soothed by delusions.

Zeh handles the plotting as brilliantly as the characterization and adds to the fun of reading by spiking the narrative with aphorisms. Some are mocking quotes from a fictive self-help guru, others reflections by characters, as in “[Linda] is so convinced of an optimal state that even when she gets her way, reality seems deficient.” Unterleuten is analytical, thought-provoking, and a wonderful read.