A Spare Life by Lidija Dimkovska 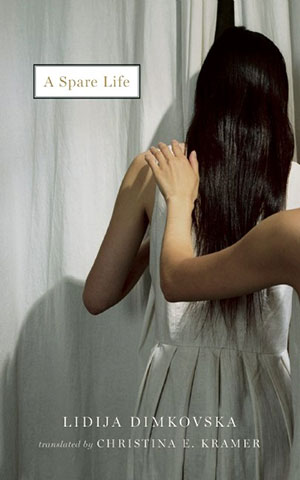 Zlata, a Siamese twin conjoined at the head to her sister, Srebra, is the unlikely protagonist of Macedonian writer Lidija Dimkovska’s remarkable novel A Spare Life. The girls’ names in Macedonian—“zlata” means gold and “srebra,” silver—ironically contradict the misfortune of their deformity. The twins grow up in the 1980s in a squalid Skopje apartment with parents who are ill-equipped emotionally and financially to meet the challenges of raising them. The girls’ mother is a caustic, miserly woman who never shows love, only resentment, toward her daughters; their father is withdrawn and emasculated by his domineering wife and the daily struggle of providing for his family while the country breaks apart. Neighbors encountering the twins cross themselves, brandish the evil eye, or spit over their left shoulders to ward off the evil and bad luck that afflicts the girls.

Dimkovska’s memorable depiction of the twins’ claustrophobic existence is riveting. The girls’ conjoined heads restrict nearly all of their physical movements—bending, stepping, or turning by one requires the other, instantaneously, to do the same. Even going to the bathroom is a shared project: one sits on a trashcan next to the toilet while the other empties herself. Dimkovska’s depiction of the girls’ dismal lives is leavened with wry humor, as when Zlata concludes that replicating Sylvia Plath’s suicide would be impossible because standard-size ovens offer too little space to stuff two heads.

The girls live with the awful reality that their joined bodies subjugate their separate, individual personalities, and the psychological consequences of this are enormous. Srebra enrolls in law school, forcing Zlata to become a law student as well. And when Srebra falls in love with Darko, Zlata is unable to absent herself from their every kiss and intimacy. Each girl is the other’s unwilling captor, and this fact erases nearly all sibling affection. The two cannot even argue properly because in order to make eye contact with one another they must be facing a mirror. Dimkovska explores these nightmarish burdens with sensitivity and beautifully articulated writing that shines in Christina Kramer’s translation.

The twins decide to undergo a high-risk separation surgery when they are twenty-four. The procedure’s uncertain outcome parallels the existential threat facing Macedonia from ethnic hatreds roiling it. Through these intersecting public and personal tragedies, A Spare Life poignantly reveals universal truths about the inability to ever become completely severed from the circumstances of your birth. (Editorial note: Read an interview from this issue with Dimkovska.)