The Encounter by Gabriela Adameșteanu 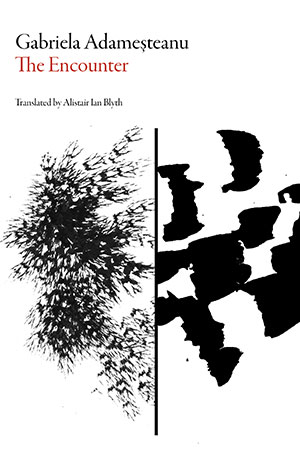 Can horrific psychic wounds from wartime ever really heal? Can one merely will oneself to forget? These are the major themes explored in this newly translated novel by Gabriela Adameșteanu. We become acquainted with Traian Manu, a Romanian scientist who defects to Italy after suffering heavy losses in the Second World War. Considered a deserter by the Ceaușescu regime, he is forbidden to return until a sudden invite in 1986 by a former peer (and now, unbeknownst to Manu, Communist Party informant) to give a lecture in Bucharest.

Housed in the infamously bugged Intercontinental Hotel in Bucharest, Manu reverts to depressing wartime memories, which only renew his animosity toward his homeland. Manu’s German wife, Crista, grew up under the Hitler regime and suffered even more tragedies in the war and struggles to overcome nightmares and flashbacks.

It’s been said that one measure of a talented writer is the ability to utilize different viewpoints in one’s fiction. Adameșteanu employs multiple narrators, tense, and voice to tell her story, thus requiring her reader to constantly readjust to these varying perspectives. We read through the lens of not only Traian and Crista but those of family, students, and bureaucrats. Unfortunately, in addition to the use of abrupt changes of narration and chronology, a section will occasionally arise where it is difficult to identify the speaker.

One main hurdle still facing Crista is survivor’s guilt. Though the war has been over for four decades, Crista still regularly plies Manu with flashbacks and nightmares. He advises her that it is possible that the wounds of the past can heal, especially if one keeps them under wraps, as he does. Crista disagrees.

In a further twist, Manu wonders if perhaps some healing and forgetting hasn’t already taken place with his wife but that she is resisting this, which ultimately leads one to wonder if peace can be made after such devastation.

Comic relief can be found in the “copies” of party dossiers on Manu by various apparatchiks, showcasing the absurdity of Ceaușescu’s minions. They follow his every move during his visit.

Romanian sensibilities abound in this story loaded with footnotes about philosophers, politicos, and cultural factotums. The translator does a marvelous job switching voice for all the various characters. One wonders, though, if perhaps the author makes her readers work a bit too hard to follow along in this valuable tale.