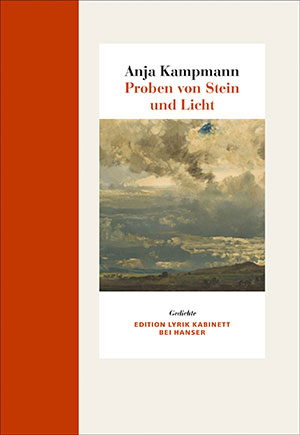 The earthly and the man-made interact with one another in Proben von Stein und Licht, a debut collection of poetry by Anja Kampmann that testifies to how the political grates against the natural. Kampmann’s progression of glass, chalk, ice, salt, and sand not only divides the work into sections but also provides palpable tools by means of which one views the past and emerges intact.

The first act of friction begins with “Bernstein.” While amber has an appearance of stone, light permeates it, and it therefore serves as a fitting introduction to both the work as a whole and prelude to “glas,” the first major section of the work. Glass, like amber, is translucent, a parallel that Kampmann makes through describing the movement of water, stone, shadow, and earth as a transition to “kalk.” Located along the borders between glass and ice—two elements that look the same to the naked eye but aren’t—is “flut,” a poem that depicts the blurring together of trees in the face of borders, war, and terror. As its title suggests, this poem serves as a gateway and transition that “park der hoffnung” (park of hope) completes.

In “sand,” Kampmann continues the theme of the repercussions of war on the natural world: “es gibt keine tiere die sich noch / aus ihren verstecken wagen / nur federn nur krallen im anschlag / dann werden felder zu wüsten” (there are no animals that dare / venture from their hiding places / only feathers and claws are poised / and this is how fields become deserts). As this image shows, the natural suffers at the hands of the artificial, an affliction that extends to entire cities and only ends when everything fades away.

As if by force, the poems in this selection do not follow regular German orthography and suspend the reader between survival and distress. Shards of verse juxtapose and blur between well-defined poems and fragments in such a way that it is often unclear whether arrangements of lines are untitled poems or a continuation of previous poems. This discontinuity further serves the collection’s purpose and illustrates topographically how war wreaks havoc on terrain. One expects, and hopes, that Kampmann’s first published book of poetry marks a passageway that connects her previous success with more work to come. Kampmann’s fresh voice to a familiar past reinforces the need to continue examining our history, even if it does remain uncomfortable.