Birdsong in a Time of Silence by Steven Lovatt 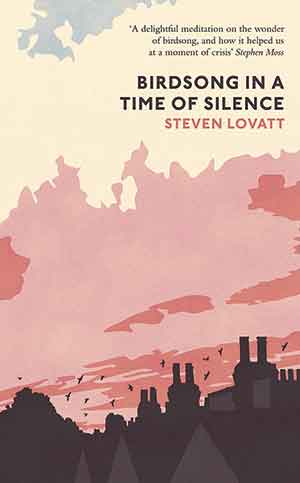 IN TRYING TO convey the quality of Birdsong in a Time of Silence, I found myself remembering something from another beautifully written bird-themed book. In Owls and Other Fantasies, Mary Oliver says: “To pay attention, this is our endless and proper work.” Steven Lovatt’s elegiac meditation is underlain by—stems from—paying attention to something frequently unnoticed. The “time of silence” that rekindled his interest in listening to birds refers to the first of the UK’s Covid-19 lockdowns. Coincidentally, the pandemic struck “at just that moment in the natural calendar when birdsong resumes in full force.” Lovatt was by no means alone in being struck by birdsong during lockdown. As he notes, thousands of people, with more time to take in what was happening around them and with less traffic noise, started to notice and appreciate it.

Listening to birdsong is one thing; writing a book about it something else. What gives Birdsong in a Time of Silence its charm is the deft and delicate touch Lovatt brings to describing something that’s highly resistant to being put into words. He talks about the way, at dusk, “robins tick, pause and tick again, as though searching for the combination that will finally open the vault of the night.” With the cacophony of a rookery he suggests that were it possible to reduce the sound to one “emotional alloy,” it would be contentment. In explaining the difference between the sounds made by crows, rooks, and jackdaws, he likens their raucous noises to “pencils of different hardness.” They share a “kindred graphite,” but express it in ways as varied as an 8B and HB pencil. He describes the whistles of two male blackbirds confronting each other as “a lode of malice made briefly audible.”

In part a celebration of the beauty and mystery of birdsong, in part a reflection on how we live and how that might be bettered, in part pages from a journal of a plague year, Lovatt has written an engaging and powerful volume. Its modest length belies its impact. This is the author’s first book. One hopes it is a harbinger of others. The skill with which he lays before readers “an almost forgotten aspect of the grammar of reality” suggests that his is a voice worth listening out for.

Whether he’s talking about migration, the way unhatched chicks are “taught” in the egg by their parents’ singing, or the crucial importance of the listening female birds when it comes to understanding birdsong, the book is informed by a wealth of ornithological knowledge. Far from reducing its pages to a dull monograph, such knowledge enhances the points he makes. Though alert to the enormous threats faced by birds—“In Britain alone,” we’re told, “there are fifty million fewer birds” than when Rachel Carson’s Silent Spring appeared in 1962—Birdsong in a Time of Silence is not an environmental jeremiad. Instead, it displays quiet optimism. Looking at how birdsong enriched people’s lives during lockdown, how paying attention to the natural world can lead to new concern for it, Lovatt reckons that maybe “something good” can emerge from this time of “uncertainty and suffering.”

Without a hint of the heavy-handedness that often happens when writers turn reflexive and examine their own craft, Lovatt’s thoughts on the difficulties his topic presents and how he tackled them add to the appeal of the book. Aware of his reliance on simile and metaphor, he notes how many of the comparisons he uses are, like the birds they describe, under threat. He likens a wren’s song to the spinning of a spindle, a bullfinch’s call to the creaking of an iron gate, the din of reed warblers to a smithy, whilst a noisy skein of geese reminds him of “coupled train carriages going over points.” The problem is that all these objects “are rapidly fading from the world.” He worries that our age of “enforced digitization” impoverishes “the common soundscape” and so restricts “our ability to communicate what birds sound like.”

In The Wild Places, Robert Macfarlane warns that we have fallen under the spell of road maps. By ignoring many features of the natural world, they exert “distortive pressure” on the imagination. The land is seen “only as a context for motorized transport—an outlook that promotes “the elimination of wonder.” Birdsong in a Time of Silence joins an impressive body of writing about birds that challenges the bleakness of the roadmap mentality, vividly drawing attention to the beauty of birds and the perils we create for them. Like J. A. Baker’s The Peregrine, Jonathan Rosen’s The Life of the Skies, William Fiennes’s The Snow Geese, Helen Macdonald’s H Is for Hawk, and James Macdonald Lockhart’s Raptor, to name a few of his fellow avian cartographers, Steven Lovatt’s literary mapping of birdsong helps restore our sense of wonder.