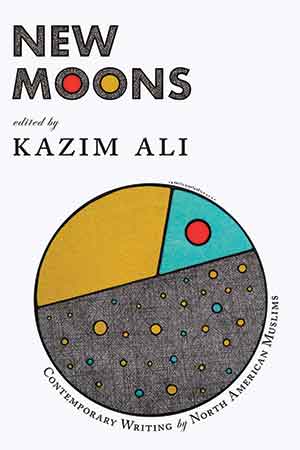 IN HIS INTRODUCTION to New Moons, a collection of poetry, fiction, and lyrical memoirs by Muslims in North America, Kazim Ali confesses the difficulty of embarking on an anthology that seeks to represent collective Muslim identity. He declares “it is hard to say what a ‘Muslim’ is,” because there is such an enormous diversity of Muslim religious and cultural practices, ranging not only in fidelity to religious observances but also variations stemming from geographic locations, cultural and linguistic formations, as well as branches within the religion. Ali shares his own heritage as Shia Muslim, a sect that traces its origins from the Prophet’s daughter Fatima, his son-in-law, and the imams rather than the more majoritarian Sunni sect that follows the caliphs. For Ali, the heterogeneity of Islam is not a modern phenomenon but something that has co-existed with Islam’s very inception.

The writings showcased in the anthology bear testimony to this vitality and variety of Muslim life. Although writers come from distinctive geographic areas, they share the experiences of immigration to North America, the loss of their homeland, and feelings of continuing cultural dislocation in their new homeland. Samina Hadi-Tabassum’s short story “Maqbool” and Naazish Yar Khan’s “Lost in Translation between Delhi and Chicago” represent South Asian Muslim families seeking to belong not only in their new neighborhoods in North America but also struggling to establish intimacy among spouses who have grown up in different milieus. Marital conflict, exacerbated by the pressures of immigration, is at the heart of several narratives, including Nour Naas’s “Mother(land)” and Leila Christine Nadir’s “Cold War.”

While many of the works in the anthology highlight tensions arising from the collision of old traditions with the new landscape of North America, many authors recapture earlier mid-twentieth-century movements of partition, violence, and ensuing statelessness. Palestine is a recurrent traumatic wound in the Arab world, and it finds expression in Mandy Fessenden Brauer’s essay “Memories of Palestine During the First Intifada” as well as Noor Hindi’s “On Language and Mourning.” The devastation of the Indian Partition and the Muslim refugees who poured into the newly formed state of Pakistan is a generational trauma that echoes in Faisal Mohyuddin’s poems “Ghazal for the Diaspora” and “Song of Myself as a Tomorrow” and in Sham-E-Ali Nayeem’s “Partition Story.”

While the end of British colonial rule in the Middle East and India created cataclysmic impacts on the lives and dislocations of Muslim subjects, a more recent catastrophe that undergirds this volume is 9/11 and its continuing effects on North American Muslim identity. Hilal Isler’s “Never Forget,” Haroon Moghul’s “Quebec Was the Semi-Colon,” and Tanzila Ahmed’s “Muslimah Fight Club” emphasize the profound shift in Muslim life and identity after the towers fell and the new surveillance mechanisms cast all Muslims as potential terrorists. This regime of surveillance is exacerbated in the Trump era with the Muslim ban prompting protests as depicted in Serena W. Lin’s “People Here Love You.” Islamophobia and systemic racialization of religion find a parallel in the transformation of secular India into an authoritarian Hindu state with the erosion of protections for minorities. This is poignantly evoked in Zara Chowdhary’s “Slow Violence,” in the portrayal of the destruction of her father’s career in a rapidly Hindu fundamentalist regime of Gujarat.

In the face of these geopolitical realities of Islamophobia, the War on Terror in North America, and a resurgent Hindu nationalism in India, this volume also documents the campaigns of ordinary Muslims in North America to claim more personal rights, whether it is the expression of their sexualities in Lamya H’s “How to De-queer Your Apartment” or Uzma Aslam Khan’s memoir “Stealth Christian, Stealth Muslim,” which explores young women’s friendships across religious barriers in a Pakistan rapidly losing its secular ethos. The act of drinking vodka in a cathedral becomes a protest against the hijacking of religion by political powers and an assertion of feminist autonomy that defies stereotypical notions of Muslim women being submissive to patriarchy.

Finally, the volume offers glimpses of the variety of spiritual practices within Islam. In Kaveh Akbar’s “Learning to Pray,” a young boy is mesmerized by his father’s body in a traditional posture of prayer, while Leila Chatti’s “Muslim Christmas” is a playful poem gesturing at the coexistence of diverse world religions. In offering a range of vignettes of Muslim life in North America from spiritual practices, political activism, family conflict, loss of homelands, to settling into new immigrant lives and forging communities of solidarity, New Moons is a timely corrective to the monolithic presentation of Muslims still pervasive in contemporary culture.