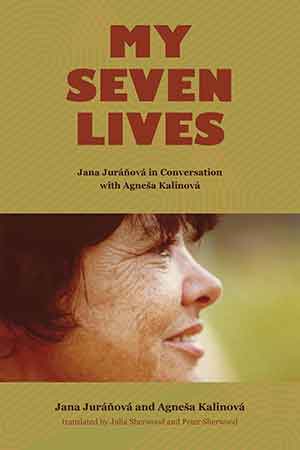 SOME LIVES ARE iconic; such is the case with Czechoslovakian intellect Agneša Kalinová (1924–2014), whose personal narrative reflects several main stages of twentieth-century Czechoslovakian and wider central European and European history—from the interwar period through the Holocaust, Soviet totalitarianism and the Prague Spring, emigration and exile, and post-Soviet Slovakia. This book is the fruit of journalist Jana Juráňová’s efforts to document this life, researched extensively and centered on forty-four hours of interviews that she conducted over several days with Agneša in 2011, already in her nineties, at her home in Munich.

The conversational structure of this biography helps it sustain an immediacy and readability that might be absent from a more traditional biographical tome, and it allows Agneša’s bright and positive personality to frame the stages of her life and discuss the context of each in greatly informative detail.

Jana Juráňová’s thoughtful and compassionate questions add to this greatly. We don’t simply learn the facts but how they played out in complex human and social reality. We get discussion of why her mother didn’t emigrate and what Agneša’s classmates were like between the wars. We see how society changed in the 1930s, not only in edicts and mobilizations but also dance lessons and graffiti—and so on through the decades.

Agneša survived the Holocaust sheltered by nuns, and the complexity of her convent life is narrated so generously that we really understand it. After liberation, her studies and intellectual life in Bratislava led Agneša ultimately to agitate against Soviet occupation—again, told in the context of marriage and family, and the complex interactions among colleagues. Following the Soviet tanks rolling into Czechoslovakia in 1968 and subsequent clampdown, she finally needed to flee, and the remaining chapters detail her work in exile, with Radio Free Europe, and the final chapters of her life in solidarity with her native, now independent Slovakia.

This translation is far from a clinical exercise for Julia Sherwood and her husband, Peter Sherwood, as Agneša Kalinová was Julia Sherwood’s mother. So, as co-translator, Julia is unusually engaged in transmitting the tone of how her mother spoke and imparted knowledge, finding warmly authentic English-language equivalents throughout. Likewise, as Julia grew up with so many of these family stories floating about, in co-translating this work she is emotionally engaged in getting every last detail squared away—as, in a way, it is a part of her story as well. The narrative is also well served by a thorough appendix with biographical notes on central European cultural and political figures mentioned along the way.

It’s startling to realize, from reading this work, how narratives such as this one can help us preserve the spirit of its society in which so much happened, collectively and interactively, in the heady atmosphere of central Europe across those crucial decades—and why it matters. I daresay many people from that part of the world were living in awareness of grander narratives they were also fulfilling with their life circumstances and daily decisions. So it is a gift that we have this one, made so thoroughly and well, to savor and learn from for decades to come.