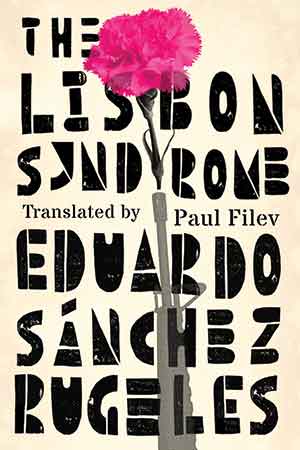 EDUARDO SÁNCHEZ RUGELES has had the misfortune of watching his country of origin, Venezuela, descend into an endless nightmare of political persecution and economic hardship under the authoritarian rule of Hugo Chávez and his successors. Born in 1977 in Caracas, Sánchez Rugeles studied literature and philosophy in his homeland before completing master’s degrees in literature and Latin American studies at universities in Madrid, where he currently resides and works as a writer of fiction and filmscripts. The Lisbon Syndrome, Paul Filev’s fine English translation of Sánchez Rugeles’s most recent novel, reflects his life experiences, studies, and profound preoccupation with the ongoing tragedy that has destroyed the dreams and lives of many of his compatriots.

The novel’s main protagonist, Fernando Morales, is a literature teacher in Caracas who offers his students the opportunity to work in community theater, an activity made possible by the generous patronage of Moreira, an elderly man who emigrated from Portugal to Venezuela as a youth to create a new life for himself in a country that was at the time a land of opportunity. We learn Fernando is also going through a separation from his wife, Tatiana, whom he still loves despite her infidelity, and that Moreira’s wife died from a hereditary degenerative disease.

In the novel’s present, political repression has increased, with protesters, many of whom are students, being tortured, killed, and incarcerated by the government’s henchmen, and the people are losing all hope for a brighter future. Fernando’s theater group is an oasis for the young people he works with, offering them a way to express themselves and to vent their frustrations with the monstrous reality they are facing, which also includes the ongoing pandemic.

Meanwhile, on the other side of the Atlantic, a natural disaster has occurred: a meteor strike has completely obliterated the city of Lisbon. In the context of these tragic natural and human-made disasters, Morales and Moreira share their stories with each other in first person, exploring the meaning of their losses and suffering. Asserting that his destroyed country lives on in its literature, Moreira cites many Portuguese writers and their works as he tries to bring some light to Fernando’s life.

Sánchez Rugeles has characterized this novel as his work that is most engaged with the struggle for freedom in Venezuela. Despite its dystopian vision of the present, the novel celebrates, through the words of Moreira, the power of stories to raise our awareness of the value of life in the midst of tragedies: “They open our eyes to the fact that, in the infinite darkness of the universe, we enjoy the privilege of the senses, of awareness, of health, of a beating heart, and that with all these things, it is more than enough to have a good life.” The author’s skillful weaving together of the experiences and perspectives of his two main characters is suspenseful, and his novel offers many surprises right up to the end.