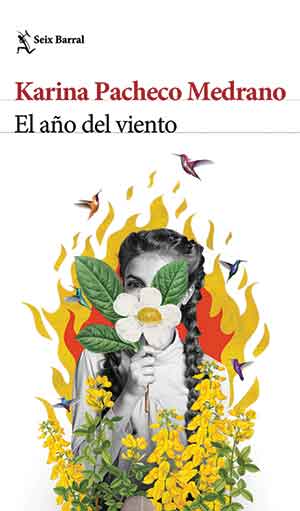 A PROLIFIC FICTION writer, Karina Pacheco Medrano (b. 1969, Cuzco, Peru) is an important name in present-day Peruvian letters. The author of acclaimed novels such as La voluntad del molle (2006) and Las orillas del aire (2017), El año del viento is Pacheco Medrano’s sixth novel. It tells the story of Nina, a Peruvian writer living in Madrid in 2020 who, one morning while shopping at a local market, runs into a woman who looks like her older cousin Barbara. Barbara mysteriously disappeared from Cuzco forty years ago, never to be seen again. Nina was only a little girl at the time, but she idolized her teenage cousin and still has fond childhood memories of her. However, upon repeatedly asking Barbara’s clone about her true identity, the only responses she gets are that the woman’s name is Berna and that “Barbara está muerta” (Barbara is dead).

Thus begins Nina’s long journey to learn more about Barbara’s lost steps, starting with her life in Cuzco in the 1980s when the war between the Peruvian government and the Shining Path guerilla movement that left seventy thousand people dead was just starting. As the narrative reconstructs Barbara’s past, the reader learns of her youthful, energetic personality as well as her determination to fight for social justice in a country historically plagued by racism and structural poverty. In the long run, Barbara’s idealism and generous spirit will clash with the cruel reality of war, her good intentions devoured by the Shining Path’s unrelenting violence.

One of the novel’s best assets is Pacheco Medrano’s ability to place women at the center of Peru’s armed conflict. Indeed, Barbara is clearly one of the author’s most memorable female protagonists, a complex individual whose mysterious existence is full of trials and ordeals, as Nina will discover. While skillfully unraveling to untangle Barbara’s life story, Pacheco Medrano returns to other recurring topics of her fiction, including a voyage of introspection to confront ghosts of a painful past, the story of family sagas and their hidden secrets, and a close look at Peru’s political violence. In the end, past and present come together in this engaging narrative, along with themes such as the loss of innocence, the exploration of personal memory, and even struggles with the pandemic.

Karina Pacheco Medrano is a gifted writer whose works continue to reach a wider international readership. El año del viento is one of her best novels to date.