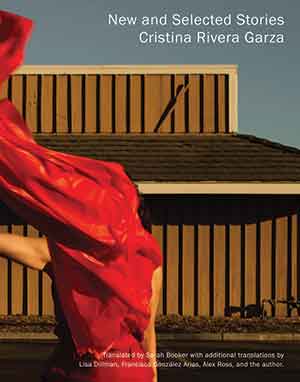 ENGLISH-LANGUAGE readers finally have the chance to enter into the beguiling, menacing, and strangely poignant world that one of Mexico’s best writers creates through her short stories. Their original dates of publication span more than thirty years, from La guerra no importa (1991) to the forthcoming Diminutus. The collection includes nearly twenty-five stories, only six of which have appeared in English before. Sarah Booker has translated most of them. The consistently high quality of all the translations makes apparent not only the changes in Rivera Garza’s themes and style but also the way that the stories share an urgent search for meaning and connection.

Unfamiliar languages and uncanny spaces frustrate this search, and Rivera Garza’s frequent narrative distance and detached tone refuse easy intimacy. In its place lies a guiding tension between the desire to belong and an unsettling awareness of inhabiting landscapes defined by isolation, cruelty, prejudice, and catastrophe. Because they impede identification, the stories succeed at placing their characters and readers in similar states of disorientation. This in turn piques the reader’s interest and intensifies the characters’ desire for companionship and a place to call home. A salient example of how such yearning underlies many stories appears in “Strange Is the Bird That Can Cross the River Pripyat,” originally from the 2008 collection La frontera más distante. Its third-person narrator describes the way an old man’s voice conjures “That kind of longing. That kind of form that longing sometimes takes.”

The gap between longing and the form it takes crystallizes a distinction between perception and experience that runs throughout the collection and often becomes visible through references to windows. In “Offside,” also from Frontera, a woman who stops for gas during a snowstorm finds herself in a forever snowy town whose inhabitants speak a language she cannot understand. The eerie indifference with which the first-person narrator and protagonist is treated by the locals, including the man with whom she begins a family, finds an anxious echo in her description of looking outside before returning to her car, which years earlier she had been told had vanished: “The condensation made me think that the world was nothing more than a great, steamed-up windshield, and this thought provoked in me a silent fit of tears.”

The narrator’s plight in “Offside” is common to many of the collection’s female characters, who face multiple dangers, including kidnapping in “Like Bitches, Like She-Devils,” originally from Guerra, and disappearance in “City of Men,” from Frontera. Peril is matched by bravery, a trait associated with, among others, the female journalist who travels to the eponymous male-only city and the woman who drives a car away from a rapidly approaching fire in the story from Diminutus titled “My Voice in Sin Narrates.” The driver in “My Voice,” the first-person narrator of “Revenge,” also from Diminutus, and the Young Woman, the moniker of one of the main characters in “Strange Is the Bird,” face collective threats, respectively: wildfires like those that plague California; an enclosed shambles of a community complete with “border walls”; and that which the Young Woman observes in Pripyat, “From the other side of the window: the remains of a nuclear power plant.” Here, another surface through which one of Rivera Garza’s characters describes what she sees reveals a looming danger and signals that her characters’ struggles to leave Chernobyl may afflict us all.

The outward succession of circles from seemingly limited spaces, some fantastical and others actual, to our own experiences as readers, creates another set of barriers and windows. These in turn demand responses to the destruction enabled by alienation, ignorance, neglect, and exclusion, responses that a more realist and identification-driven writer might offer, but whose sincerity or ability to communicate what’s really at stake Rivera Garza’s narrators and characters would likely regard with suspicion.