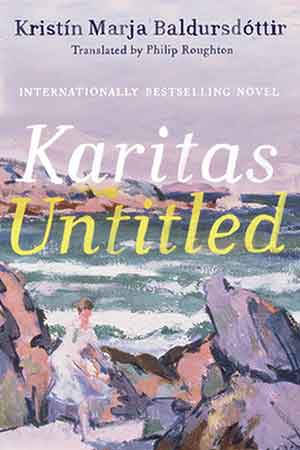 AT THE TOP of the tallest mountain in the country, two women hold each other tight. Auður, the widowed housewife, is a prodigious mountain woman, herbalist, caretaker, and mother. Karitas, the artist and our protagonist, has never understood the appeal of mountain climbing. But too many months of insomnia have frayed the artist’s nerves and sapped her sanity, and even her art, becoming more experimental in form with each sleepless night, cannot grant her sleep. As a final resort, Auður has led her step by step to the highest point in Iceland, pausing to rest only when the younger woman can bear the exhaustion no longer, from the slope where the wild herbs grow, over the glacier, and up the Sléttubjörg ridge. At the top, where the sky and country and silence surround them, the two women embrace, holding each other to the earth.

Women holding each other to the earth is a beloved subject of Kristín Marja Baldursdóttir, an acclaimed and beloved Icelandic author. On the Day of the Icelandic Language, November 16, 2011, she was awarded the Jónas Hallgrímsson Prize for extraordinary service to the Icelandic language. The jury lauded her devotion to “the life and work, the dreams and longings of women.” Baldursdóttir dedicates Karitas Untitled, her first novel to be translated into English, to the women who raised her: grandmothers, mother, and great-grandmothers. Honoring this dedication, Karitas Untitled holds relationships between women close to its core: mothers and daughters, sisters, girlfriends.

The women of Karitas Untitled keep each other clothed and fed when their husbands disappear off to sea. They use the last drops of their breast milk to make crepes and read poems at each other’s graves. Their relationships are never explicitly queer, but despite their ephemerality, their intimacy and intensity are as meaningful, and far more tender, than Karitas’s relationship with her strong, beautiful, and sometimes abusive husband. While Baldursdóttir evokes the shame and pleasure of a repressed female sexuality with dignity, love between women ends in unexpected disappearances or remains hidden in the margins.

Baldursdóttir’s brilliance lies in the enigmatic and the implicit. A reader unaccustomed to Icelandic fiction might describe her work as magical realism, for elves, ghosts, and tall tales haunt the dark corners of the book. Undeveloped erotics linger around the edges, too: a cigarette-smoking girl from Reykjavík, a mysteriously disappearing blue milk jug, a man who comes to Karitas only in dreams. These little eccentricities might be explained away by Karitas’s sleeplessness, or perhaps by the growing divide between her life as a fisherman’s wife and her destiny as an artist.

Or perhaps the streaks of fantasy enlivening the pages of the untitled novel serve to manifest the world’s chaos, the same chaos our artist seeks to release. Her task as an artist, she knows, throughout her charcoal sketches and oil paintings and cutlery collages, is to unleash chaos that rages within her, within every person, like a wild horse. The untamed mare of fiction is alive and well in Karitas Untitled, sometimes sleepy and mild, but most often bucking and kicking and galloping into the distance.

Karitas struggles up the peak. With the perspective of elevation, she remembers all she has lost before coming to Öræfi, the mountainous region where she regains strength after a prolonged mental and physical collapse. Her hand in Auður’s, she whimpers her way up the ridge, unable to control her crying fits. There, Auður finds the words to end her pain. “Despite your losses, you still have one thing that is all your own, and that is your art,” she says. “The pictures of yours that I have seen are quite strange, but they have a kind of inexplicable magic to them. Perhaps the best art is that which one doesn’t understand.”