Power Born of Dreams: My Story Is Palestine by Mohammad Sabaaneh 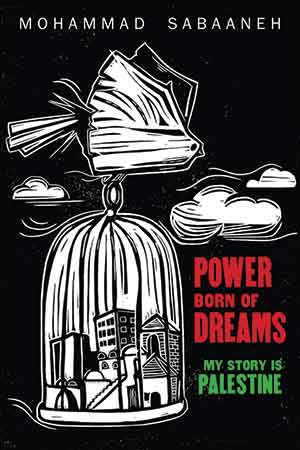 CONFLICT AND STRUGGLE, both political and personal, have long been potent subjects for literature. And in the past forty years, ever since Maus, graphic memoirs and novels have taken up similar themes. From Maus and Persepolis to March and Rolling Blackouts and many others, graphic novelists have deployed image and word to tackle very difficult subjects. Mohammad Sabaaneh now joins their ranks.

Power Born of Dreams is a dark work, both visually and metaphorically, yet there are splashes of gallows humor and insights into many of the vagaries of the human condition. Set for the most part in an Israeli prison, a Palestinian prisoner converses with a bird, each telling stories about the lives and deaths of the Palestinian people. The stark black-and-white linocut images are as harsh and as powerful as the narrative, and the unadorned, straightforward language drives the emotions home.

Sabaaneh was himself a political prisoner, and this grim fablelike memoir follows his journey from arrest in the West Bank to imprisonment in an Israeli prison, a movement he calls “The Postage.” The scenes in which he attempts to amuse himself and stay sane in a cell by singing, molding a towel into a ball, or drawing in the air are soul-crushing. But when the bird appears, it carries the message “Caged men and caged birds are the same. Our power is born from the dreams of freedom.”

And then the stories begin—of a child born at a checkpoint because the guards would not let the couple proceed to the hospital, of the student killed by a random bullet, of a Palestinian prevented from building a home on land he purchased—as the bird says, too many stories to tell in such a brief book, but each one presenting the Israeli occupiers as merciless. One of the most devasting of these is of a boy who asks Sabaaneh, who has previously painted portraits of martyrs, whether he will be painted when he becomes a martyr. This young Palestinian’s expectation of martyrdom paints a bleak scenario for the future.

This is a book about occupation and the loss of home, a place where the need for hope and the lack of hope are equally terrifying. In the last several pages, in prose with no drawings, the author outlines what he believes has happened since the 1967 Israeli military occupation of the West Bank, East Jerusalem, and Gaza. It is clear that Sabaaneh is delivering a vision of the political situation from a decidedly Palestinian point of view—there are no good Israelis here. But these dark stories are illuminated by Mohammad Sabaaneh’s artful telling of them. Readers of various political views will find this a powerfully affecting and compelling book.