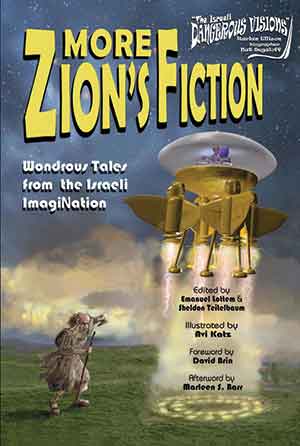 WHEN ZION’S FICTION was published in 2018, that groundbreaking anthology of Israeli speculative fiction in English was part of a wave of speculative fiction in translation (SFT) and partial-SFT anthologies that we hadn’t seen before or since. In the grand scheme of literary things, of course, ten is not a large number. In SFT terms, though, ten anthologies in one year is huge. And Zion’s Fiction, thanks to its editors Sheldon Teitelbaum and Emanuel Lottem, introduced anglophone readers to Israeli authors, styles, perspectives, and tropes we couldn’t find anywhere else.

Fast-forward to 2021 and a new volume of dynamic, engaging Israeli SFT. More Zion’s Fiction brings us award-winning stories from familiar and rising authors. Furthermore, this volume’s introduction dives deeper into the nature of Israeli speculative fiction than that of the previous volume, which offered an exhaustive account of the development of that subgenre in Israel. In More Zion’s Fiction, Lottem and Teitelbaum consider why Israeli SF seems so localized and insular. The first-person singular, they point out, seems to dominate these stories, where protagonists face fantastical situations in the course of their everyday lives. The Israeli-Palestinian conflict, notably, is absent—not because stories about it weren’t chosen for inclusion in the book, but because Israeli authors of speculative short fiction don’t explicitly draw upon it. With speculative fiction still being seen by some Israelis as a nonserious genre, despite the increase in SFF conventions, magazines, publishers, and online forums, the genre in Israel still accounts for a tiny minority of Israeli books. And while Israel is, itself, a geographically tiny country, its SF output is increasing with every year.

More Zion’s Fiction includes an interesting mix of short stories, novellas, and everything in between, with several originally written in English. One of my favorites of the shorter variety is Elana Gomel’s “The Sea of Salt,” which imagines how a young woman tortured by the knowledge that her grandfather was a Nazi travels back in time to try and stop him; she uses the Dead Sea as her portal to the past. The malleability of time is also the basis for Guy Hasson’s “The Assassination,” though it isn’t travel per se but involves an instrument that can capture audio from a specific point in the past. Here, Hasson delves into the Israeli war of independence and the military choices that were made to drive the British out in the 1940s.

Fairy tales appear here as well: Nadav Almog’s “The Thirteenth Fairy” and Pesach Amnuel’s “Above the Clouds, Above the Mountains, Above the Sky” (trans. David Reid) could be set anywhere, and yet the dark horror of the former and the mystical optimism of the latter both find their place in the Israeli speculative landscape. Elsewhere in this volume, the dead speak from their graves (“Composting”), travelers bring their dragons through airport security (“Dragon Control”), and aliens are sent to Earth as “Word Farmers.”

Some of the most compelling stories, I must admit, are the longest ones. Keren Landsman’s “Schrödinger’s Gorgon” (trans. Emanuel Lottem) is a sci-fi thriller about an alien virus that is transmitted through sight, while Hila Benyovits-Hoffman’s “Five Four Three Two One” (trans. Rehavia Berman) imagines a genetic experiment in which five fetuses were combined into one, resulting in the birth of a person who transforms into a different one each day. In Yael Furman’s horrifying story “Set in Stone” (trans. Sarit Shalhevet), an artist with magical powers has found a way to turn humans into stone and then give them the power of movement whenever he chooses. The final story of the volume, Rotem Baruchin’s “Latte, to Go” (trans. Rehavia Berman), is a unique tale of Israel’s City Spirits, their human guardians, and the conflicts that arise when an ancient spirit without a city tries to take over Tel Aviv.

Israel, with its dynamic mix of religions, immigrants, and experiences, becomes tangible through More Zion’s Fiction. Its sights and smells, its history and challenges, are woven through each of these speculative stories and expand our understanding of what the genre is now and can become in the future.