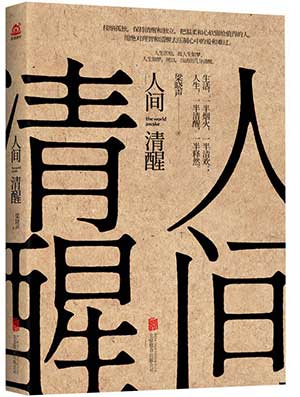 AFTER WINNING THE Mao Dun Literature Prize in 2019, Liang Xiaosheng gathered some of his life stories for his latest book, Ren Jian Qing Xing (The world awake), to convey his feelings about life: stay awake, stay angry, stay true.

The book can be divided into two parts. In the first part, Liang recalls his childhood stories and reveals the reason why he desired to become a writer. Liang’s mother always encouraged her sons to read more books, even though she and Liang’s father were illiterate; often spending three days’ wages to buy books for her sons. Other women would often make fun of her acts. They believed that boys from the lower-class families would never become big shots. However, Liang’s mother did everything she could to preserve her sons’ dreams and never undermine their confidence. Being a worker made Liang’s father a serious character. Liang hated his father because he rarely returned home, and Liang was expected to look after the whole family on his behalf. This memory softened after the birth of his own son, encouraging him to spend time with his family and leaving him with fewer regrets. Another person exerting a great influence on Liang was his Chinese teacher in primary school. When he was slandered, teased, and misunderstood in school, his Chinese teacher always stood by his side, providing him with a safe haven from which he was able to pursue his dream of becoming a writer.

The second part contains a variety of stories that take place during Liang’s middle age. Outside the Beijing mall, he meets a middle-aged woman who makes a living by watching over bicycles. They both want to purchase the same book from a local bookseller, but, due to her precarious financial position, she can’t afford to pay full price for it. Liang elects to forgo purchasing it to improve her bargaining position. Soon after, the woman offers to watch over his bicycle for free. In another story, Liang hears of a local boy who is skilled at catching geese. To earn money for college, the poor boy sells the geese to the local restaurant. After graduating from college, the boy returns to his hometown and builds a wildlife reserve for geese.

There is a popular saying among young Chinese: “Although I have heard many principles concerning how to live, I have yet been able to use them to live well.” Liang is the exception to such a rule. Despite his childhood hardships, he steps up to care for his entire family, accepting all the miserable moments in order to cultivate a few joyful ones. His stories encourage readers to stay awake and learn everything from different life experiences.