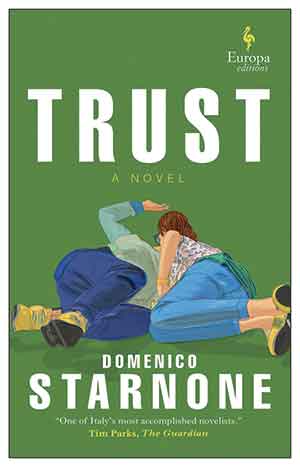 TRUST, DOMENICO STARNONE’S sleek novel of confidentiality and incipient blackmail, traces the lifelong consequences of the conflict of wills between two characters—Pietro Vella and Teresa Quadraro—and what they talk about when they talk about love.

Told from three incisive perspectives—Pietro’s, his daughter Emma’s, and Teresa’s—it is a high-adrenaline roller-coaster ride, a delicate balance between knowing someone’s worst secret and deciding whether or not to expose it. In “The First Story,” an aged Pietro recollects his passion. As he’s known it, love is a “lava of crude life that burns the refined one, an eruption that obliterates understanding and piety, reason and rights, geography and history, sickness and health, richer and poorer, exceptions and the rules. All that’s left is a yearning that twists and distorts, an obsession without a cure.”

His obsession with Teresa began when he was a high school literature teacher in Rome, she, his student, a “disobedient and quarrelsome girl.” They are drawn to each other in a volatile, all-encompassing, all-involving relationship. But passion wanes quickly, lasting only three years. When they meet up again, unable to quit each other, they agree on a pact: to tell each other their most “awful” devastating secret, something they have never told anyone else, and to trust each other with a bond of love that it will remain their shared knowledge and no one else’s. Three days later they break up. Therein hangs the thread on which each character dangles.

In less than a year, Pietro, on the rebound, takes up with a colleague, Nadia, a math teacher. They marry after a “chain of complex implications that could rearrange your entire existence.” Pietro becomes a minor celebrity after he writes a brief essay excoriating Italian schools. He and Nadia have several children—Emma and two sons. The trajectory of his research and prominence soars, gaining them a new home, a teaching position at a new school, and a new life. When Teresa unexpectedly appears at a book launch in Milan, he fears she will reveal his secret. Instead, she suggests a platonic “ethical marriage” with “lovely and affectionate conversation.”

“The Second Story,” in Emma’s voice, jumps forty years. She is a frontline journalist. Pietro is nearly eighty. When she learns that the state has created a commission to sponsor a national day dedicated to schools and will award prizes to three professors who have most influenced the nature of education in Italy, she decides to encourage the country’s president to assure that her father will be one of them. The only catch is that she must ensure that a “student of unimpeachable prestige” will appear to testify to his impact. Of course, she chooses Teresa.

“The Third Story,” the last section of the novel, is Teresa’s tale to tell. Now living in Manhattan, she recounts her entangled involvement with Pietro from her point of view, disputing what the reader has been told by him. Starnone deftly juggles the drama of the dénouement, forestalling the disclosure of whether or not either one of them will appear for the awards ceremony.

In translating Trust, Lahiri sees it as a “quest for liberty, the collision of past and present, building a career, fear, aging, anger, mediocrity, talent, and competition.” Starnone makes it a bristling analysis of the tantalizing premise that we “fall in love with people who seem real, but don’t really exist”—there is the person we love, and then there is the real person.