Eccentric Days of Hope and Sorrow by Natalka Bilotserkivets 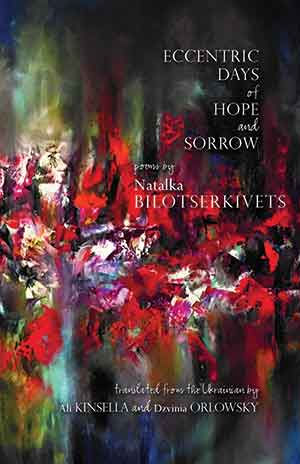 UKRAINIAN POET Natalka Bilotserkivets had her first two collections of poems published in the 1970s, although she started writing and publishing her work in literary venues at a very young age. In this sense, Bilotserkivets is a particularly fascinating case as her career begins in the Soviet era. Her formation, as a poet and individual, took place in a time of political stagnation. Despite that (or even maybe thanks to that), her continuous development, growth, and quest—in a poetical as well as other senses—did not really stop but were prolonged. Her poetry noticeably changes and cultivates; the poet freely experiments and investigates new possibilities poetry can offer—and this is another reason that her verses are of special attention to readers.

The collection begins with a one-poem prologue followed by five sections. In her introduction, Ali Kinsella, one of the co-translators, asserts that Bilotserkivets’s voice “is not always the voice of power; as often as her speakers are agents fully in control, they are also confused, at a loss, or even victims,” and thus this brings readers “a richer and more complete picture of the human experience,” which “draws on a broader register.” Bilotserkivets, one may suppose, is an unexpected poet, one that clearly feels at ease with a wide array of topics, casting her net openly, widely, and easily. No matter what Bilotserkivets writes about—love, lust, frustration, maturing, aging, adolescence, music (yes, lots of music), distant geographical locations, and unrecognized countryside—you don’t register any deception or trickery. This is the poetry of a diligent observer who converts what is seen and experienced into these masterfully crafted messages. This coherence and accuracy are happening, in part, because, as Dzvinia Orlowsky, another co-translator of this collection, mentions in her preface, the translators intended to “ensure that the essential elements of lyric and narrative poetry—music, imagination, story, structure, and lyric intention—remained in harmony.”

Bilotserkivets’s list of personal obligatory reading that influenced her work includes the Russian modernists Andrei Bely and Boris Pasternak (appreciated in the original) mixed up with European and Latin American modernists such as César Vallejo, Constantine Cavafy, and Paul Celan (read predominantly in exquisite Ukrainian translations). On the Ukrainian side, her work was primarily impacted by the modernist poet Pavlo Tychyna. The latter clearly was a significant influence and served as a barometer measuring the poet’s modernistic and symbolistic thick layers of colorful, dense imagery, as in the poem “Bridge”: “The air is as still and hot / as my body. Arched like a bridge / over a river. It’s so quiet—the nightingales / must be drinking their own black alcohol.”

The book should be praised for its covert structure. Interestingly, even though the collection comprises poems from most of the poet’s collections, the poems aren’t clearly demarcated as is traditionally the case. A reader doesn’t know immediately about the poems’ context: do these poems come from the poet’s early period, or are they from the most recent one? Or are they just mixed in a special way? This approach has two immediate consequences: on one hand, obviously, it doesn’t say much about the very architecture and etymology of the poems. On the other hand, this forms a friendly suspense for a fully immersed reader who might want to try and decipher the collection’s arrangement.

If we may assume that a translation is an X-ray of the original, we look for mutations, changes, developments, and fractures. An award-winning poet, Dzvinia Orlowsky, coupled with the award-winning translator Ali Kinsella, produced these truly finely tuned versions of diverse and stylistically nuanced originals. When translating you need to be courageous; you also need to be adventurous with your own languages; you need this fearlessness to retune the poem’s sound and rearrange the poem’s architecture. Fondly and respectfully trespassing the originals, the duet Kinsella and Orlowsky managed to effectively introduce a significant contemporary woman’s voice hailing from Ukraine.