The Book of All Books by Roberto Calasso 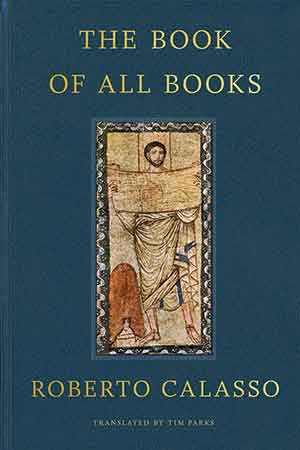 DURING HIS AMERICAN exile, on the evening of November 17, 1942, at the Library of Congress in Washington, Thomas Mann gave an address about his quadrilogy, Joseph and His Brothers (1933–43), the most expansive of his novels, telling the story of Joseph’s abandonment by his brothers and the life he lived in Egypt. During that lecture, while reflecting on Goethe’s Dichtung und Wahrheit (1833) and what it says about the lack of detail in the story of Moses—thus making the case for writing the novel—Mann proudly reminisced how his secretary, tasked with typing the first volume in full, told him: “Now we know at last how all this actually happened.” The Book of All Books, by Roberto Calasso, the Italian writer and publisher who died in July 2021, is accomplished in a closely related way, though the way in which Goethe’s heritage is taken up differs—a point to which I will return shortly.

In addition to his work for the Milan publishing house Adelphi Edizioni, Calasso is known for his study on the role of sacrifice in modernity, for which he frequently turned to examine archaic sources, like Greek and Vedic mythology. The series will conclude this year with The Tablet of Destinies, and now The Book of All Books has become available in English translation. It entertains some kind of dialogue with John Barton’s A History of the Bible: The Book and Its Faiths (2019). Yet where Barton covers the external history of his subject, the history of its composition, Calasso here narrates the internal history of the Bible—the very life of this eternal text. This means that Calasso’s is an investigation of the ways in which the language of the Bible exceeds or overflows its religious or moral teleology. Like Barton, Calasso underlines how the Bible is not reducible to one particular creed, but for a reason diametrically opposed: where Barton finds artifice in the composition, Calasso sees the endless complexity of the organism of language. The reason for this is that the language of monotheism is structured to the logic of sacrifice: excess is its most fundamental motif. As monotheism sees the relationship between the divine and the world, nothing is ever enough or stable, but always subject to forestalled and deferred messianic interruption. For that reason, monotheism is fated to hover between eternity and historicity, for instance in the sense that Christianity at every point and again and again will open up eternal time within secular time.

The remarkable thesis of a truth in spite of all criticism—like in the case of Mann’s secretary copying a work of fiction—returns here in a pivotal chapter about Freud’s work on the same subject, the Egyptian chapter of the same history: the story of Moses. Yet where Mann and Freud claim Goethe as support for a psychoanalytical comportment that brings us face-to-face with the subject matter of the Bible by collapsing the distinction between fiction and reality—it is emphasized that Freud writes his Moses and Monotheism as a novelist—Calasso, through Freud, reclaims another Goethe. Dichtung and Wahrheit, poetry and truth, are to remain different categories, even when they interlink, so that the “book of all books” is a hermeneutics to access a higher plane of reality, where we indeed share the stage with Joseph and Moses. Calasso’s oeuvre, now almost complete, is a perpetual commentary on this further dimension to the act of reading.