Let Us Believe in the Beginning of the Cold Season: Selected Poems by Forough Farrokhzad 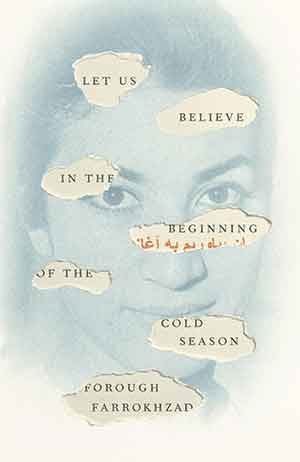 DURING HER SHORT lifetime, Forough Farrokhzad (1934–1967) risked everything to become one of Iran’s foremost feminist voices. Her poem “Sin” caused an uproar upon its publication in Roshanfekr (The Intellectual), a preeminent magazine in Pahlavi Iran. “Sin” explicitly describes Farrokhzad’s affair with a married man (also the editor of Roshanfekr): “I sinned a sin full of pleasure / in an embrace that was warm and fiery / I sinned in arms that were hot / and vindictive and made of iron.” That Farrokhzad was also married, and had a young son, shows incredible public bravery—though men in Iran were permitted to take lovers on the side, a woman could be killed if caught straying. Despite the depravity alluded to in the title, the constant I throughout “Sin” stands out as a declaration of strength, not regret. There is a clear pride in giving in to desire, but also the bliss in inhabiting the wide-open country of freedom, whether in the bed of a lover or within her own mind. Published in 1956, “Sin” was one of Farrokhzad’s first poems and proves her ambition from the outset.

The titles of Farrokhzad’s collections speak to her personal growth, from a young woman yearning for discovery and recognition to a mature voice affected by her work with lepers, but they could just as easily mark a progression of Iranian society: Asīr (Captive), Dīvār (Wall), Oyisān (Rebellion), Tavalludī dīgar (Eng. Another Birth, 1981), and, posthumously, Aymān biāvārīm dar aqaz-eh fasl-eh sard (Eng. Let Us Believe in the Beginning of the Cold Season, 2022).

At the time of her death, Farrokhzad was only just beginning to make her impact on Iranian literature and film. Art is never prophetic, but it can seem so if the artist is living close to the bone of society and correctly recognizes which simmering emotions will one day rise to a boil.

Through her art and life, Farrokhzad had become—not unwittingly—an emblem of freedom, choice, and empowerment. Suffrage reached Iran in 1963, and in 1967, the year Farrokhzad died in a car accident, aged thirty-two, new laws protecting wives, children, and female divorcees—laws whose absence had caused Farrokhzad no small amount of grief—were finally introduced. But in just over a decade, the 1979 Iranian Revolution would curb many advancements made by women’s groups. The title poem, “Let Us Believe in the Beginning of the Cold Season,” can be read as a warning of the coming changes of revolution, when Farrokhzad writes, “This world is filled with the sound of the footsteps of people / who as they kiss you / mentally braid the rope for your hanging.”

In her translation, Elizabeth T. Gray Jr. sought to capture “as much of the beauty, strangeness, ferocity, and stillness of the original.” She has done so, and more, bringing the best of Farrokhzad into the light, where she is easily recognized to be as relevant and fresh today as she was sixty years ago. (Editorial note: Visit worldlit.org to read Farrokhzad’s “Reborn,” translated by Sholeh Wolpé, in the “Writing Beyond Iran” issue [March 2015].)