The Lights of Pointe-Noire by Alain Mabanckou 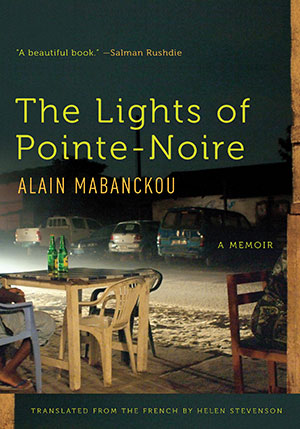 Without so much as a few lines’ hesitation, Alain Mabanckou extinguishes a persistent, haunting myth within The Lights of Pointe-Noire: despite clinging to the notion that his mother was alive and well, an idea bolstered by his physical distance from the Congo, she had, in fact, died in 1995. With this sobering acknowledgment, Mabanckou establishes an intimate channel between the audience and the narrator ensuring attentiveness to the emotional struggle at hand. By readily disclosing what could safely be considered his most nagging secret, Mabanckou cultivates a connection between his readers that develops as his reflection unfolds. Propelled heavily by wondrous and sometimes sordid tales of the people and places of the text’s namesake, Mabanckou produces a gripping narrative examining childhood wonder, deep-rooted remorse, and long-awaited actualization.

A piece bounding between past and present, Pointe-Noire does not unfold chronologically but rather traces the author’s path to reconciliation thematically, with the moments of his adolescence and adult life interwoven in such a way that only in a few sparse instances feel jarring.

Mabanckou is quick to examine the nature of myth, likening his mother to the reincarnation of a deceased sorceress forever trapped in the moon. Here, Mabanckou acknowledges the importance of lore, fueling the wonder of his childhood self while later bringing comfort as an adult. The writer also admits, however, that a reliance on myth and superstition can often push an individual toward inaction. Trading security for growth lies at the heart of Pointe-Noire, and this theme is prevalent in the sections pertaining to Mabanckou’s return to his homeland. This teaching is interlaced expertly, never feeling heavy-handed despite popping up with relative frequency. Rather, Mabanckou encourages application of this notion, presenting his own life as a ripe example, engaging the reader with his willingness to assess his own anxiety and fear while still painting a vivid image of literary inspiration.

Myth and fabrication cannot be deconstructed, of course, without some fantastical, if not magically real, moments spurring them. Pointe-Noire’s latch often comes from the events prior to Mabanckou’s departure for France, but the synthesis that comes with his return is what truly allows these tales to resonate. For example, when encouraged to visit his ill cousin, Bienvenüe, his hesitation to do so persists throughout the majority of the piece. Though Mabanckou shares the public fear of the hospital brought on by the peculiar morgue director, he is further dissuaded by a superstitious notion. His uncle, along with two additional relatives, died in the room his cousin is residing in shortly after their admission. Unlike his younger self, who went to great lengths to preserve the “life” of his stillborn older sisters, this obstacle suppresses the writer’s ability to fully self-actualize, which he does not shy away from considering.Here, Pointe-Noire succeeds in achieving much more than a traditional memoir, sprinkling throughout its pages the lesson that triumph, especially over denial, is an endless process.

Though perhaps the previous statement seems bleak, Pointe-Noire is a text built upon optimism. This hope, however, is not brought forth simply through success but instead by a willingness to recognize the comfortable, stagnating myths we often tell ourselves in order to maintain a current station. The memoircontends this but is also careful to recognize how daunting a task it can be through memorable anecdotes. Mabanckou fashions a beautiful discourse out of this universal quandary, enticing one not only with the tales that begot his literary career but also with a lifelong struggle toward reconciliation.