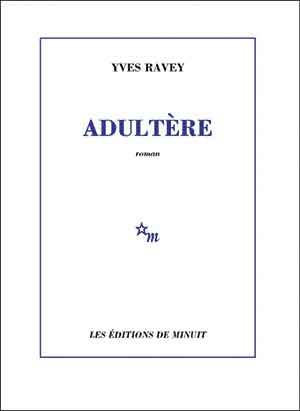 YVES RAVEY HAS been writing well-received novels and plays since 1989. His seventeenth novel demonstrates once again that he is one of the best living representatives of le roman noir, the literary counterpart to film noir. In the United States, his work could be likened to the genre of the hard-boiled detective novels written by Dashiell Hammett and others. In France, Ravey is often compared to the master of detective novels, Georges Simenon, although he has not produced a recurring character who would be comparable to Simenon’s Commissaire Maigret.

Adultery is ostensibly the motive and the driving force that leads to a sordid murder in Ravey’s latest novel. In this short narrative, the author once again describes in detail the actions of his characters, while providing little in the way of introspection or insight into their private thoughts. In a small nondescript town, Jean Seghers, the owner of a failing service station, is mainly concerned that his wife seems to be having an affair with a friend (and sometime business partner) of his. As it turns out, she is, but with another man. In Adultère, the traditional plot elements of a roman noir—the love triangle, the femme fatale, the vengeful husband, and the murder victim—are less important than the weight of the gloomy atmosphere that envelops the banal characters and their dreary urban environment.

Seghers, the main character, remains strangely passive, indeed often submissive, as his marriage and his business slowly but steadily collapse around him. His unexpected outburst of violence is therefore all the more shocking, as is the sudden and tersely reported plot twist that closes the narrative. Despite having resorted to drastic measures, Seghers is not a changed man afterward. He continues to be the drab, withdrawn, unassertive character whom others can easily ignore or scorn.

Ravey’s writing builds up the tension between the various characters by successive but slight degrees. The contrast between his minimalist style and the level of anguish endured (or callousness exhibited) by some of the characters provides a particularly vivid reading experience. The same can be said for the disparity between the carefully constructed banality of his novels’ settings and characters and the sophistication of his dramatic storytelling. Like the best of his predecessors in the noir genre, Ravey conveys complex, powerful emotions by means of an austere, pared-down literary technique. If he were a film director, he could be compared to Alfred Hitchcock.