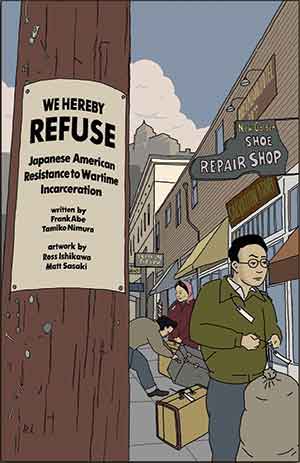 FOR DECADES, THE stories of over 112,000 Japanese American individuals incarcerated in the United States during World War II were framed through just one public narrative: if Japanese Americans were wrongly “interned,” it was a “mistake” born of wartime security concerns; Japanese Americans went quietly and were eventually released. No great harm was done. Silence about this economically ruinous, violently dislocating, and deeply shaming experience also held in the Japanese American community.

At the time of the incarceration, the powerful Japanese American Citizens League urged complacency and worked with the US government to tamp down resistance in the community. But, as this narrative profiling three young people who resisted the incarceration in different ways makes visible, resistance there was. When faced with the infamous “loyalty questionnaire,” Hajime Jim Akutsu, a twenty-two-year-old studying electrical engineering in college, answered “yes” regarding being willing to serve in the US military (though he had already twice been rejected for having flat feet) but gave an unequivocal “no” to the second question, to “forswear allegiance” to the Japanese emperor. He saw the Catch-22. A “yes” here implied a prior allegiance to forswear. Hiroshi Kashiwagi, a nineteen-year-old high school graduate from a farmworker family, having already registered for the draft, at first refused to answer both questions. Finally, under pressure, he wrote “no” to both questions—as many did (the “no-no boys”); he became one of thousands segregated into different camps by their answers, ostensibly to cool violent tensions between factions—tensions created, in fact, by the conditions of an inhumane incarceration.

As a woman, Mitsuye Endo, a twenty-one-year-old typist for the State of California, was not required to complete the loyalty questionnaire. However, she worked with lawyers and others as the face of a civil lawsuit that would, after years of litigation, force the courts to declare the incarceration illegal. How is it I had never heard the name of the woman whose court case led to the end of this incarceration?

This is a closely researched project. Amid engaging and detailed personal stories and beautifully rendered images, the scattered reproductions of actual historical documents carrying the names of the young people startle and remind us: these are real people. Documented quotes from prominent community members, politicians, and the judiciary make clear that the racism in which this injustice was rooted was endemic in the United States. The incarceration was no “unfortunate mistake.” This graphic narrative reframes the experience of incarceration as anything but monolithic—and gives body and voice to some of the many individuals and groups of Japanese Americans who were neither silent nor complacent in the face of injustice.