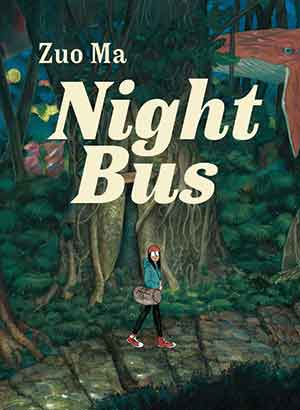 MORE A PHANTASMAGORIC dreamscape than a straightforward narrative graphic novel, Night Bus contains eleven stories, the longest of which is the eponymous one at 214 pages. Though these stories are discrete, there is overlap in terms of characters and especially themes and images.

The first story, “Walking Alone,” features family members that have come to their grandmother’s home in the countryside. The older boy goes for a walk and introduces a major theme, that of the contrast between urban life and country life and the slow disappearance of the agrarian lifestyle as urbanity encroaches in China. Animals are anthropomorphized, which they will continue to be throughout the stories—a spider speaks, a dog pops a tape into a VCR, and cats take notes and express their emotions articulately. In addition, the issue of the grandmother’s waning cognizance emerges. It is easy to see the deterioration of the elderly here as a precursor to mourning the Chinese way of life the way it once was, especially in the countryside.

With the very long “Night Bus,” Zuo Ma (b. 1983, Zhijiang City) reveals his deep sense of the surreal. The story begins in color, a six-page rarity in this volume. A young woman whose face is obscured by huge round glasses passes through colorful urban terrain until she emerges into stark black-and-white to find the night bus. But then the dreamscape takes over. Grandma becomes a fish, there’s a UFO, animals morph into other animals, the forest is alive and frightening, and the author, in a meta moment, becomes a character fearing that the story isn’t coming together. In truth, his fear is not unfounded. “Night Bus” goes on too long primarily because the narrative is propelled mostly by images that are not only fantastic but diffuse. This tale could have used more text, especially given how time here is so fluid and impressionistic.

In the later stories, the character Xiao Ma is introduced, and she livens things up. She is an anti-establishment punk whose style draws criticism. Her response is “Who cares? They don’t appreciate my individuality.” Her character feels like the author’s comment on contemporary Chinese society.

Zuo Ma employs black-and-white and gouache to great effect in the entire volume, and readers can relish many of the panels while trying to decipher multiple images. At times, houses appear to be in outer space; at other times, the road is mundane. But there is always something intriguing to see.

Night Bus is rife with adventure, frequently as a window to the interior of the characters, and the reader may not always be able to follow. Yet the sense of youthful experimentation and alienation, along with Zuo Ma’s depiction of the decline of the elderly, are often very affecting.