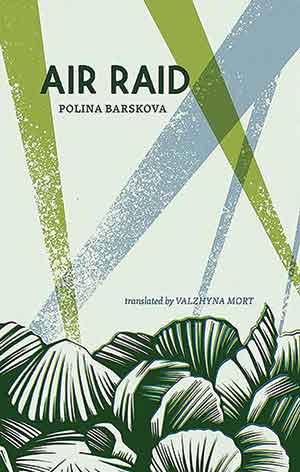 POLINA BARSKOVA, poet and professor, is the author of twelve books of poetry in Russian and two books of prose, with three books (or parts of books) published in English translation before this one—a selection of her work from different years. Like all books from Ugly Duckling Presse, where it is number 47 in the Eastern European Poets Series, Air Raid is handsomely produced on good paper and feels nice in the hand. Best of all, it is a bilingual edition with facing-page translations into English by another important poet, Valzhyna Mort, who now lives and works in the US (as does Barskova). The book has many things to offer fans of poetry (in Russian and/or English), historians of Russia (especially the Stalinist repressions, the Holocaust, and World War II—which for the USSR began in 1941 and is called the Great Patriotic War), and anyone who practices, studies, or just appreciates translation.

The term “air raid” is so familiar that we probably don’t notice that it’s close to being a palindrome. The Russian expression is Воздушная тревога—literally, “air alarm”—and the schematic searchlights on the cover might evoke their aural companions, the siren. History is a vital element of this collection, with the strands of repression/Gulag, Holocaust, and the Siege of Leningrad twining through several of the poems or cycles of poems. (The table of contents lists twenty items, but some include multiple sections or poems.) The siege is less well known in the West than other elements of Soviet history—but cut to me for a moment, an undergraduate student in the library decades ago, weeping over Harrison Salisbury’s The 900 Days. For Barskova the study of life and writing during the siege has been a significant scholarly project (see her edited collection Written in the Dark: Five Poets in the Siege of Leningrad, also from Ugly Duckling), reading letters and manuscripts in archives, and as we see here reacting with her own poems.

Barskova was herself born in Leningrad, now St. Petersburg, and the city’s history is her heritage. She expertly writes both metrical, rhyming verse (which feels particularly suitable to the topic of World War II and to children’s verse, with a real snap in a lot of the lines); in more recent years, she has moved more into free verse. No one would call it dissident verse, but it is all deeply subversive, refusing to adhere to the officially cultivated tradition of treating the Soviet war effort with solemn pomposity. The characters who appear in the poems, many of them Leningrad writers and cultural figures who suffered terribly during the siege, are also presented without numbing reverence: they are complex, fully rounded human beings with flaws, idiosyncrasies, and misdeeds, and even the most pitiable of them (the ungifted translator Zinaida C.) receives sympathy in a poem where the contents of her apartment are cataloged after her death, presumably somewhere in a snowbank. The whole book’s tragic cast and refusal to idealize anyone (including the poetic speaker herself) can lead to weird details. The titular cycle “Air Raid” re-creates letters between a daughter who has been evacuated to (relative) safety, her father arrested and now in a gulag, and her grandmother, who has stayed behind in Leningrad and will soon die there. In one the father asks his rather young daughter to send him a package with dog fat, which he realizes will force her to catch, kill, and butcher the dog, plus salt and lightly smoke the extracted fat: a monstrous request! In another, the grandmother’s letter-as-poem ends with the line, “What happiness that right now you are not with me”—another monstrous thought, though understandable as she can at least rejoice in her granddaughter’s safety.

The book’s second section moves (mostly) closer to the present, though the past still greatly informs it. These poems draw on the poet’s own life or describe a series of “romantic” walks through American graveyards (some with graves of Russian writers like Sergei Dovlatov, himself an émigré from Leningrad) or present a series of portraits from Hampshire College, where Barskova previously taught. In one poem she lies on the ground in the yard of Emily Dickinson’s house in Amherst, now a museum. The professor side is often visible, though Barskova tends to surprise the reader rather than lecturing. Perhaps any poet needs to know the history of earlier writers: both their writings, which create subtexts and expectations, and their biographies, which offer hope or threat and may (as here) demand that the poet respond.

Translator Valzhyna Mort is a prominent young poet writing in Belarusian—an East Slavic language close to, and long suppressed by, Russian. That history equips her completely for this task: in the course of World War II, whatever we call it, Minsk (where she would later be born) was flattened, and a full third of the population of the Belorussian SSR perished. (Consider that “decimate” means to destroy a mere tenth of some group.) Mort does not strive to replicate rhyme or rhythm, even for the rhymed and metrical poems. In a few places this is a loss (in the case of one bit of children’s rhyme, for instance), but otherwise she does the work with effective sound patterning. The book’s first poem, “A Sunny Morning in the Square,” rhymes in Russian; the Polish town Białystok (in its Russian form, Belostok) calls up the words listik (little leaf) and listok (leaflet or memo). Mort’s translation properly uses the town’s Polish name—it was in the part of eastern Poland that the USSR occupied after the Molotov-Ribbentrop Pact was signed in 1939; its residents went from Soviet invasion to Nazi invasion, followed by the roundup of the majority Jewish citizenry, which the poem somewhat surrealistically describes. Like the rest of her translations, this one does not pad or distort in an effort to rhyme and scan—but “trick” and then “stuck” appear in the near vicinity of “Białystok,” showing the gravitational power of the name.

I am usually deeply suspicious when a translator makes changes as considerable as those Mort makes, and yet in her hands it works: the essence comes across, sometimes even more sharply. Here is a later stanza from “A Sunny Morning in the Square”: “The soldier curses at them: we’ll build a circus! / Our circus king will show you his tricks. / A star built of smoke and scream! / History crams a lesson down your throat.” On one hand, the gymnastic flip of “curses” into “circus,” on the other the surreal “star built of smoke and scream”—Soviet five-pointer? Star of David? Four-armed swastika? Sometimes Mort practices explication to clarify for an anglophone reader: “Чужое письмо” (Someone else’s letter) becomes “Ivan Turgenev to Pauline Viardot, a Letter,” and the initials “M.B.” expand into “Bakhtin”—well, I doubt that even a Russophone reader would have caught that without a bit of graduate study. Several pages of notes at the end of the book helpfully identify writers who are less well known. Mort gets away with using “Thou” because it is God, one case where English will still tolerate the archaic second-person pronoun. Elsewhere, simple word-for-word translation does the job: “Но я вас говорю” becomes “But I speak you,” the creepy weirdness of accusative rather than dative case preserved by selecting the right English word, “speak” rather than “tell.”

Let’s linger for a moment on the final poem, “Pottery/Poetry”—the title of the Russian original in English, because the trick is untranslatable. Here the poetic speaker finds comfort and even refuge in an art where her mastery is less demanding—and where God is not pursuing her with his bloodhounds Dostoevsky, Gogol, and “Blok the Spaniel,” the great male writers of St. Petersburg, pre-Leningrad. Here the translator manages some real tours de force, clipping the words to their shared Po, adding “pale” to what in the Russian is just “fire.” (Nabokov is indeed a certain kind of Petersburg writer and a thought-provoking example of émigré literary eminence.)

The book’s afterwords and commentary offer a conversation between poet and translator, full of quotable passages and striking thoughts about translation. Here Barskova welcomes the changes Mort has brought through translation and comments, “Poetry’s jobs are minor: to comfort a mourner, a lover, for a brief moment. Elegy, one of the earliest forms of poetry, was born as funeral song. As I see it now, the job of consolation is crucial, the job of giving medicine—even if it cannot bring anybody back to life, it can patch the texture of life as it is, make it softer, warmer. Damn it, make it prettier.” Mort is clear about the linguistic and literary politics of her enterprise: “Both English and Russian are imperial languages systematically used to justify violence. This commonality makes the breaking translatable, particularly by a translator like me, for whom Russian is a stepmother tongue, an imposed, colonial language. When I translate your work, I get to break Russian while wearing the gloves of English—I’m an untraceable Belarusian criminal.” She adds: “While Western discourse has serialized and overproduced the narratives of twentieth-century pain, the Russian (and Soviet) discourse has done everything not to allow such an archive to exist.”

In sum, this is a rich, wonderful book. Barskova is an important poet whose work should be on the shelves of every lover of that tradition, with this thoughtful selection of her work. Mort, poet and translator, has such mastery of soundplay that her translations could be instructive for an apprentice poet as well as moving and striking for any anglophone reader. Readers who are themselves translators, especially those working between English and Russian, will encounter many lessons as well.