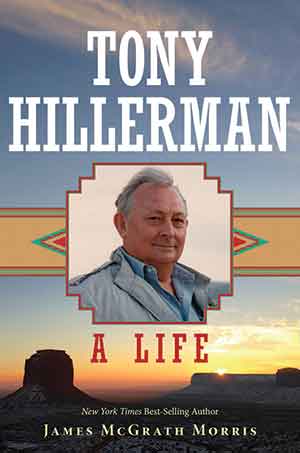 WRITTEN TOWARD THE end of his career as a novelist creating the incredibly successful Navajo mystery series, Tony Hillerman’s best-selling autobiography, Seldom Disappointed (2001), is notable for its calm acceptance, tinged with humor, of what life brought the author. Twenty years later, we have in Tony Hillerman: A Life what promises to be the authoritative biography.

In Seldom Disappointed, the passages on Hillerman’s war experiences on the European front are direct, unflinching, candidly detailing his conflicting feelings amidst the foul-ups (snafus) of combat. They are narrated without bitterness, even though his severe wounds were the result of an ill-advised advance over a known minefield. It seems he is writing from a position of self-harmony, a state of being that attracted him to the Navajo in the first place. In his new biography, Morris delivers the facts of Hillerman’s war years, adds context, and describes the writer’s perspectives, sometimes employing direct quotes to show their flavor. But it’s when Morris’s book moves away from the early years into Hillerman’s career as a professor at the University of New Mexico and an aspiring novelist that it goes well beyond Seldom Disappointed.

We learn something about his lecture and advising style from former students. We learn just how thorough a researcher and listener he was to reach an understanding of Navajo ways and beliefs. (We also learn how and why the Navajo are more open to an outsider than other tribes in the area.) As if he were scouting locations for a film, Hillerman would drive, float, or fly—sometimes with Marie, his wife—to sites in the rugged canyons of northwest New Mexico to make sure he described them accurately and to confirm that the action he planned could happen there. Aware that he was an outsider and impelled by his respect for the Navajo, he wanted to make sure he got the details right.

I was struck by the care with which Morris made sure he got his details right. Abundant endnotes support each chapter, each sometimes containing up to three or four sources, seemingly to confirm what one source claimed. In one chapter of just over eight pages, endnotes numbered twenty-four, with more than thirty separate sources. Yet the reader is not conscious of bumping from one source to the next in that or any other chapter. Morris constructs a smooth narrative.

Some facts emerge that were not so emphasized in the memoir: the hijinks associated with Hillerman’s editorship of a humor magazine at the University of Oklahoma; that as a newsman, he had to deal with the anti-Communist fever of the 1950s in both Texas and New Mexico; the value of spider solitaire for sorting out plot ideas; his dedication to writing; his wife’s rather incredible support to make sure Hillerman had the time and private space to write, all while managing a houseful of kids; the solid support and promotion extended to Hillerman by the editors and management of HarperCollins (formerly Harper & Row) throughout his career as a novelist; that teachers in some Navajo schools found his novels useful in getting their students to read and to value the traditions of their tribe; finally, the anonymous philanthropy of the successful author even as he was sometimes accused of expropriation of tribal culture through his successful novels.

Morris’s treatment of the novels is appropriately circumspect. Where the locations and germ of ideas came from, the process of writing and rewriting, the reception and sales figures—all are explained with care so as not to spoil the plot for readers and rereaders. Do I remember who the “obvious” murderer was in one novel? I’ll have to reread. One especially appreciates the author’s summaries of two important thematic elements: the Navajo beliefs concerning witches and their concept of Hózhó or the achievement of internal harmony in adapting to external conditions.

Both mystery fans and those engaged by Hillerman’s treatment of Native culture and the southwestern landscapes will want to read this biography. Morris certainly establishes Hillerman as a key member of that small group of authors—such as N. Scott Momaday and Louise Erdrich—who opened the doors of publishing houses to more sensitive and realistic treatments of contemporary Indian culture and Native protagonists treading between Anglo and tribal ways.