The Liquid Land by Raphaela Edelbauer 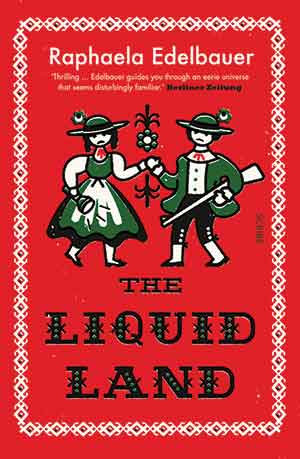 FROM THE FIRST PAGE of this beguilingly strange, darkly comic novel, we are plunged into a destabilized realm of fiction where the laws of rationality, physics, and linear duration no longer seem to apply. The narrator, Ruth Schwarz, herself a “physicist of time” and a research student addled by opioid addiction, learns of her parents’ death in a mysterious car accident, colliding into a crash barrier and rolling down a slope “with infinite slowness” in an ominous prolepsis of later slidings.

Ruth travels haphazardly to her parents’ rural hometown of Greater Einland to organize the funeral, initially unable to even find out whether the region exists. Finally discovering an anachronistic alpine backwater filled with unworldly, beer-swilling eccentrics and parodic clichés of stock Austrian culture (quaint taverns serving schnitzels, a gothic castle inhabited by a neofeudalist countess), she gradually becomes acquainted with this precarious “liquid land,” its physical stability undermined by a giant, water-seeping hole that threatens to drag the whole town into its depths.

At times, the novel, as translated into English by Jen Calleja, reads like a postmodern détournement of classic German texts like The Castle and The Magic Mountain, where a baffled protagonist is drawn into an environment whose shadowy, labile qualities become inseparable from their own inner disorder; at others like an absurdist version of a murder mystery in which the narrator struggles to penetrate a local conspiracy of silence—in this case, regarding her parents’ deaths and the impending disaster that hangs over the town. Despite its compelling plot-momentum, in some ways this is a work of metafiction, the narrative swirling around the ungraspable vacuum of meaning at its core, slowly collapsing inward like Greater Einland itself.

As Ruth’s role morphs unwittingly from that of a naïve outsider to acting as a spin doctor for the enigmatic countess in her ongoing crisis management, it becomes increasingly clear that there is also an allegorical subtext operating here on a number of levels. The symbolic weight of the hole, as a kind of subconscious repository for Austria’s buried past, collides with actual history as Ruth unearths evidence of concealed corpses from the Nazi period, a cover-up that has become taboo over time. The complicity of science in this cultural amnesia is signaled in her invention of a toxic “filler” to plug the hole and save the town, at the cost of its local ecology. But the novel ultimately defies plot resolution, ending on a note of ambivalent self-assertion as Ruth acts to reclaim her destiny.