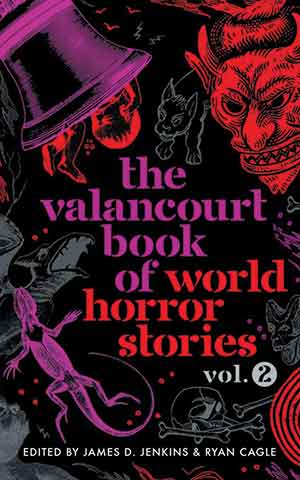 I DESCRIBED VALANCOURT founders James Jenkins and Ryan Cagle’s first volume of The Valancourt Book of World Horror Stories as “a grand guignol of horrific oddities from across the world” (WLT, Winter 2021). The anticipated second volume is the after-party everyone wanted and more, featuring a broader range of global horror traditions than the first volume, hailing from twenty countries and originally published in sixteen languages.

As before, the second volume features a variety of horror genres, from the gross-out body horror of Zhang Yueran’s “Whitebone Harp” (China), the folk horror of Konstantinos Kellis’s “Firstborn” (Greece), the Kafkaesque philosophizing of Wojciech Gunia’s “The War” (Poland), to the freakery of Steinar Bragi’s “The Bell” (Iceland), and so on. The diversity of stories is truly global, especially when paired with the larger francophone and hispanophone contingents of the previous volume; stories hail in equal parts from Europe, Asia, and Latin America, and one story each comes from Africa and the Caribbean. I would certainly like to see more in future volumes from South and Southeast Asia, as well as from the nations of the Black diaspora and the Arab world.

Outstanding stories include Yavor Tsanev’s “The Recording of the Will” (Bulgaria), which opens the collection, and allegorizes the evil of bureaucracy in people’s everyday lives; Val Votrin’s “The Regensburg Festival” (Russia), about a choir director who learns to teach gargoyles to sing; Indrek Hargla’s “The Grain Dryer of Tammõküla” (Estonia), a folk horror tale about the destruction of traditional pagan beliefs and their detrimental incorporation into modern life; and Gary Victor’s “Lucky Night” (Haiti), a voodoo folktale wrapped up in a story about political corruption. Some of the wilder stories that leave you thinking “what did I just read?” include Steinar Bragi’s “The Bell” (Iceland) and Stephan Friedman’s “The Pallid Eidolon” (Israel), neither of which I’ll describe so you can experience them yourself.

The sheer range of the second volume impresses and delivers on exactly what a volume of this kind promises: the opportunity to explore and discover what people are doing with horror outside the anglophone world, in countries many anglophone readers might not have guessed had horror traditions, some dating back hundreds of years. While not every story is a glittering gem of literary craft, and some are frankly odd choices for a collection of stories representing the “best” voices of world horror traditions (I think especially of the awfully derivative “The Ant” by Maltan author Anton Grasso), the collection nonetheless serves as an impressive library for future discovery, a mark of hope that we might get more someday, whether from Valancourt (yes, please!) or from other publishers excited by Valancourt’s accomplishments. Indeed, already Valancourt has teased their upcoming volume of horror stories translated from endangered languages with Viola Cadruvi’s “The Runner,” a short fable of eco-horror originally published in the endangered Swiss Romansh language.

I eagerly await future terrors of the Valancourt kind and salute the work Jenkins and Cagle have done to widen our experience of horror in the anglophone world.