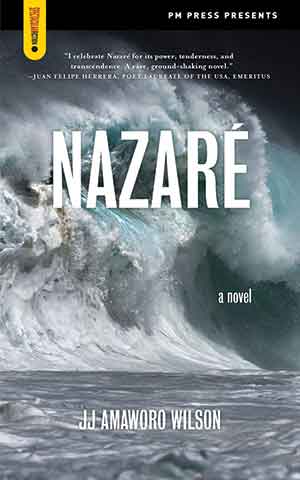 NAZARÉ IS AN incantation, an allegory, and a prophecy. With imaginative and ornate linguistic skills, and a brutal naturalism veiled by a fairy-tale opening and the spinning of mythical plots, Wilson creates for us a world of turmoil in which a political coup is inevitably launched. When the nameless fishing village receives the ocean’s “gift”—a half-stranded whale on the beach—continuous miracles follow.

Kin, the novel’s protagonist, is charged for having required uncanny powers while he is still only a young boy, sleeping inside a shipping container dressed in rags, and growing up wild in a chaotic period. His greatest attraction to local villagers is neither his stamina, shown when he is tortured by the dictator, nor his courage as a revolutionary, but his ability to hear the echoes of nature and rhythms of life. He alone can hear the whale’s singing, the songs in between water and ships, and “a B-minor chord performed by winds and stones.” Even in the darkest of times, he can compose a song of suffering, a hymn to heroism. Freedom fighters support him, leaderless people follow him, and chance favors him. He is the chosen Kin of Waves—Nazaré—that will annihilate all the evils and injustices in the country.

Besides poor miners and tinkers, the cast of characters includes the professor guiding the revolt, the holy man Fundogu with his revelations, the “Joan of Arc” Jesa riding a camel, and the righteous wizard with his magic; all vivid and impressive characters weaving an intriguing net, in which solid animal images are integrated, enriching the scenario—such as the old turtle, who becomes a substitute for a judge, and monkeys who form a rebellious army. Even the feathers of pigeons and raindrops after a long drought seem to be endowed with magic and vitality.

There are vibrant depictions of running, hiding, fighting, and killing, done with an idiosyncratic sense of absurdity and black humor. Even though we can predict that justice will eventually prevail, we are still pleasantly surprised by the doom of the oppressor and his accomplices. “Everything begins and ends in the sea,” as the apocalyptic prophet of Nazaré has forecast.