A Passage North: A Novel by Anuk Arudpragasam 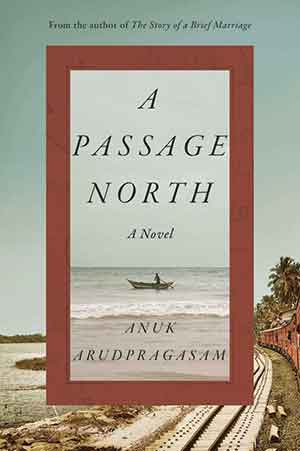 IN 2017, ANUK ARUDPRAGASAM, a virtual unknown in the literary world, beat a former Booker winner and other senior novelists to the DSC Prize for South Asian Literature with The Story of a Brief Marriage. The novel was lauded for conveying the last stages of the civil war in the north of Sri Lanka in harrowing, captivating detail without bringing any combatants into the story or attempting an overt political statement—the focus being on Dinesh, who is so traumatized after witnessing his mother die of a shell wound and the conflict generally that he is unable to perform sexually during the only night he spends with his bride.

Though situated in the postwar period, A Passage North has a point of convergence with the previous novel—Rani also suffers from PTSD after losing two sons to the conflict. But there the similarities end. If Marriage eschews any open political ideology, Passage graphically describes the eye-gouging and killing of separatist Tamil leader Kuttimani in a state-sponsored prison riot—a vicious response to his public declaration that his eyes would be donated so that someone could gaze at a Tamil Eelam one day. The author persona realizes, when he journeys toward the “Tamil homeland,” that “what he was seeing now was not exactly his own vision but the superimposition of Kuttimani’s upon his own”; furthermore, the action here is not confined to Jaffna but ranges from Colombo, Krishan’s hometown; Jaffna, where he works for an NGO; and several locales in India.

The narrative begins with Krishan receiving a call from Jaffna saying that Rani, his grandmother’s caregiver, had inexplicably died on a routine visit to her village, and an unexpected email from his estranged Indian girlfriend. The two incidents lead to a multiplicity of reminiscences and philosophical musings. Although the book’s title is inspired by the journey to attend the funeral, as the narrator himself discloses, “he couldn’t help thinking . . . that he’d traversed not any physical distance that day but rather some vast psychic distance inside him, that he’d been advancing not from the island’s south to its north but from the south of his mind to its own distant northern reaches.” This strategy allows the examination of core issues such as trauma, transience, aging, yearning, companionship, mourning, and suicide.

If the depiction of character relationships was of secondary importance in The Story, it is crucial here. To cite two examples, Krishan’s fascination for his Indian girlfriend, Anjum’s, looks, social activism, offbeat behavior, and the peaks and troughs of their relationship are compellingly captured as is Rani’s interaction with Appamma. Though Krishan had brought Rani from Jaffna to serve as a companion to Appamma, who is seemingly on the verge of dementia, the bonding is mutually beneficial as it allows Rani a momentary respite from PTSD. The author’s ability to depict complex relationships sans any dialogue and to shape and control the narrative through Krishan’s “central consciousness,” furthermore, are technical triumphs that are unequalled in Sri Lankan English fiction.

Yet the novel has shortcomings, it must be said. Bringing in episodes from the early life of Prince Siddhartha toward the end allows the author to show how Buddhism should be practiced with compassion to all whereas many atrocities are committed in the name of Buddhism in Sri Lanka. Too many “snapshots” to prove a simple point are a distraction, however. Then again, the detailed rendition of Hindu funeral rites in Passage comes perilously close to a form of exoticism. Finally, Arudpragasam had rendered Rani’s ultimate realization that shock therapy, self-harm, sleeping pills, and companionship were only “palliatives,” and that nullity was the only “cure” for her war neurosis with remarkable insight, so having Krishan’s ghoulish imagining of the flames inexorably consuming Rani’s mortal remains is a needless exercise in underscoring.

Arudpragasam’s bringing in the female Black Tigers Dharshika and Puhal, which was inspired by a documentary, could both exhilarate and trouble readers. There is no doubting their bravery, commitment, and humanity despite their calling, but focusing on Dharshika’s willingness to kill Puhal and vice versa if the cause is imperiled—claiming that “they would, upon dying, be reborn into the nation for which they’d just died” if their suicide missions succeed—and drawing parallels between Rani’s self-annihilation and such missions that allow individuals to control their own deaths could be construed as glorifying violence.

Such deficiencies notwithstanding, A Passage North will appeal to many for revisiting the war from multiple perspectives, employing elegant, haunting, meditative prose, presenting intricate character relationships, and (for the sentimental) suggesting that Anjum might be reaching out to Krishan again.