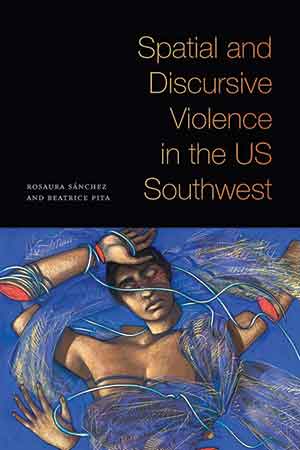 KNOWN FOR THEIR books on California history, literary criticism, and narrative fiction, Rosaura Sánchez and Beatrice Pita have released an authoritative response to claims that any form of criticism against the United States is unpatriotic and treasonous, taking it as proof that the English language has been politicized and manacled, thus impairing our relations to language and to national communication. Spatial and Discursive Violence in the US Southwest is a thoroughly researched and detailed account of US history, restoring along the way the meaning of such terms as criticism, patriotism, and nation. The restoration of meaning to this trinity of words unveils what Americans in general have not learned, or prefer to forget: on one hand, the westward movement of the thirteen colonies with Black enslaved persons in tow in the wake of the acquisition of Florida, Louisiana, Texas, and the remaining southwestern regions as a result of the war of aggression against Mexico (1846–48); on the other, the peace treaties with Native Americans and their subsequent disavowal by the United States. As the authors assert, “Words and paper have as much a hand in the process of dispossession as guns and fences.”

Sánchez and Pita grant center stage to two main themes: first, the imposition of enclosures in the US Southwest from the seventeenth to the twenty-first centuries; second, the analysis and interpretation of available records in Mexican American and Native American historical archives, including novels, autobiographies, and short stories. Since critical memory is synonymous with intuitive recall and retrospective appropriation, the authors break away from the sole emphasis on Mexican American history by way of references to “enclosures,” meaning the confrontational acts of land annexation and settler colonialism by US invaders in a recurring cycle of dispossession and displacement of Native Americans and Mexican Americans, thus wresting away geographical spaces as sources of identity, cultural traditions, and the means of subsistence. The authors call attention to a territorial expansionism that pressed on the colonized—Indian, Spaniard, Mexican, and Mexican American—in the form of verbal or discursive violence meant to humiliate, terrorize, and, at times, to acts of violence and lynching, central modes of controlling “ethnic” groups in the process of nation-building in US history.

As historians, Sánchez and Pita know that history does not stand still. References are made to an unexpected turn backward in American history headed by the Trump administration, verifying that its “base” surprisingly includes Latinos, women, and Black Americans, thus invalidating the worn-out and ineffective critical approaches in academic settings by way of “cultural studies,” compartmentalized and simplified according to ethnicity, gender, or class. With a will to face past errors of omission, Sánchez and Pita exhort Chicano and Chicana historians and novelists to reexamine US history and to engage in a broader debate and exchange of ideas, beginning with what scholars have preferred to forget: namely, the participation of Spaniards and Mexicans in a historical process of dispossession of Native American lands. The only instances in which Indians enter center stage in Chicano discourse—as Sánchez and Pita point out—is in the form of Aztec forefathers of present-day Chicano cultural nationalists. The ironic and critical observations continue with references to Hispanics in New Mexico who in novels and autobiographies express pride in their white skin, blue eyes, and purity of blood; or, to the support of leading Californios and Tejanos of the Confederacy during the Civil War, some owning Black enslaved persons.

Within such a framework, this book sets in motion innovative incursions into the national and the global from a southwestern standpoint, therefore not confined solely to ethnic spaces. The intent is to establish communication within and beyond one’s immediate terrain. In the book’s concluding pages, Sánchez and Pita make clear to younger generations—implicitly, the Chicanx and Latinx peer groups—that persons are free to embrace a personal identity based on gender, sexual orientation, professional occupation, or, among other possible choices, ethnicity; however, they firmly assert that “new identities must perforce be grounded” not solely on an alleged cultural affiliation but on political and social action founded on awareness, knowledge, and analysis. After all—the authors contend—one does not, and should not, live in a vacuum.